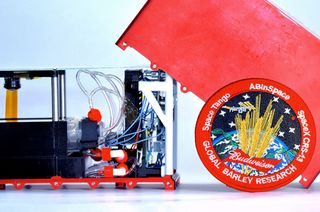 Budweiser barley seeds will be studied on the International Space Station to advance the first "Bud on Mars."
(Image: © Anheuser-Busch)

Budweiser is sending barley seeds to the International Space Station to advance its bid to be the first beer on Mars.

Anheuser-Busch, the brewing company behind the "Great American Lager," announced on Tuesday (Nov. 21) details about its experiments bound for Earth orbit. Twenty barley seeds will launch on board SpaceX's next Dragon resupply mission to the space station, where they will be subjected to microgravity for 30 days and tested for germination.

"Budweiser is always pushing the boundaries of innovation and we're inspired by the collective American Dream to get to Mars," said Ricardo Marques, Budweiser vice president. "We are excited to begin our research to brew beer for the Red Planet." [Space Beer! New Brew Was Made from Spacefaring Yeast]

First announced at the South by Southwest conference in Austin, Texas in March, the Budweiser experiments are the first step in the company's long-term commitment to have beer available for the first astronauts on Mars — whenever they might get there.

NASA is currently working toward possible astronaut Mars missions in the 2030s, though a renewed focus on a return to the moon may alter that schedule. SpaceX's Elon Musk has also stated his company's intentions to send people to the Red Planet to establish settlements.

The launch of the barley seeds and their related research apparatus was organized by Budweiser's innovation team working with the Center for the Advancement of Science in Space (CASIS), the organization which manages the U.S. National Lab on the station, and Space Tango, a payload development company that operates commercial research facilities in the National Lab. The experiments are formally titled, "Barley Germination and Malting in Microgravity."

Malting barley is "a process that results in the high-quality malt used in Budweiser today," according to the company. The research aboard the space station will reveal how the barley seeds react to the environment on orbit.

In the first experiment, "Seed Exposure," barley seeds will be kept at the orbital laboratory for 30 days to observe the effects of exposure to extended microgravity. Barley seeds are best grown in cool, dry places.

"Poor storage can lead to bad beer," explained Budweiser in an infographic, "so this experiment will help understand if the storage and environment is adequate in space."

The second experiment, "Seed Germination," will test how barley seeds grow in zero-g, or weightlessness. The seeds will be nourished and irrigated in a similar way to how they are grown on Earth. On the ground, barley typically grows 6 to 10 feet tall (2 to 3 meters) in a two week period.

"This experiment will test ... if the seeds grow at the same rate in space," said Budweiser.

The research is intended to help develop a beer for Mars, but it could also provide information on the production of barley — the fourth largest cereal grain grown in the world — and other agricultural crops on Earth, Budweiser stated.

The 20 barley seeds will be sent to the International Space Station packaged in two Space Tango CubeLabs — 4-inch (10 centimeter) square units used to hold experiments — on SpaceX's 13th commercial resupply mission, slated for launch in December from NASA's Kennedy Space Center in Florida. The seedlings will be in orbit for about a month before being brought back to Earth on the same SpaceX spacecraft for Budweiser to study.

The data derived from the barley seed experiments will set "the foundation and blueprint for Budweiser's next move in brewing the beer of the future.”

See an infographic about Budweiser's "Bud on Mars" barley seed experiments aboard the International Space Station at collectSPACE.com.