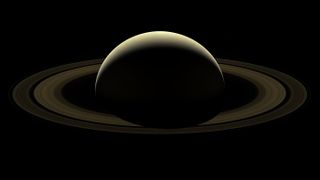 NASA's Cassini spacecraft bid farewell to the Saturnian system by capturing this last, full mosaic of Saturn and its rings on Sept. 13, 2017, two days before the spacecraft's dramatic plunge into the planet's atmosphere.
(Image: © NASA/JPL-Caltech/Space Science Institute)

The Cassini spacecraft's farewell photo of Saturn is something to behold.

On Sept. 13 — two days before its intentional death dive into the ringed planet's thick atmosphere — Cassini took dozens of photos of Saturn using its wide-angle camera. Now, mission team members have assembled those photos into a single gorgeous mosaic, which shows the planet and its iconic rings in all their glory.

A half-dozen of Saturn's 60-odd moons — Prometheus, Pandora, Janus, Epimetheus, Mimas and Enceladus — are even visible in the image, as tiny dots of light, dwarfed by the immensity of their parent planet. [Cassini's Greatest Hits: The Spacecraft’s Best Images of Saturn]

"For 37 years, Voyager 1's last view of Saturn has been, for me, one of the most evocative images ever taken in the exploration of the solar system," Porco, who's based at the Space Science Institute in Boulder, Colorado, said in a statement.

"In a similar vein, this 'Farewell to Saturn' will forevermore serve as a reminder of the dramatic conclusion to that wondrous time humankind spent in intimate study of our sun's most iconic planetary system," she added.

The $3.2 billion Cassini-Huygens mission — a collaboration involving NASA, the European Space Agency and the Italian Space Agency — launched in October 1997 and reached the Saturn system on June 30, 2004.

The Cassini mothership delivered a lander called Huygens to the surface of Saturn's largest moon, Titan, in January 2005, and then kept cruising through the ringed planet system for more than a dozen years, making a variety of observations.

During this time, Cassini made a number of discoveries that have reshaped scientists' understanding of Saturn's formation and evolution, as well as the solar system's potential to host life. For example, the mission spotted seas of liquid hydrocarbons on Titan, and Cassini's observations showed that Enceladus hosts a possibly habitable ocean of salty liquid water beneath its icy crust.

And then there are the images — thousands of them, which have intrigued researchers and delighted space fans around the world.

"It was all too easy to get used to receiving new images from the Saturn system on a daily basis, seeing new sights, watching things change," Cassini imaging team associate Elizabeth Turtle, of the Johns Hopkins University Applied Physics Laboratory in Laurel, Maryland, said in the same statement. "It was hard to say goodbye, but how lucky we were to be able to see it all through Cassini's eyes!"