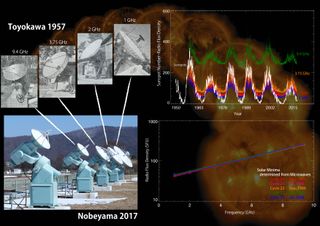 Microwave telescopes observing the sun in 1957 (top) and today (bottom left) have given 60 years of data on radiation produced during the sun's 11-year minimums.
(Image: © NAOJ/Nagoya University/JAXA)

Sixty years of data reveal that, while the maximum level of solar activity can vary drastically, one measure indicates it always returns to the same quiet minimum.

The sun goes through an 11-year cycle of activity — at maximum, there are more sunspots and solar action as the sun's magnetic field curls and twists, sending charged particles flying out (sometimes toward Earth). At minimum, the sun's face is smooth, with fewer sunspots and less activity.

The sun's activity is also reflected in the amount of microwave radiation it releases — and that microwave level and the specific bands of radiation released have remained the same during the past five solar minimums, according to new research. [Take the Sun Quiz! Test Your Solar Smarts]

Researchers began continuously monitoring the sun's microwaves in 1957, using a telescope at the Toyokawa Branch of Nagoya University in Japan, according to a statement describing the new work. That telescope was relocated to the National Astronomical Observatory of Japan's (NAOJ) Nobeyama campus in 1994, but it has kept its sensors fixed on the sun.

"Other than sunspot observations, uniform long-term observations are rare in solar astronomy," study lead researcher Masumi Shimojo, lead researcher on the new study and a researcher at NAOJ's Chile Observatory, said in the statement. "It is very meaningful to discover a trend extending beyond a single solar cycle."

Though researchers have tracked sunspots and solar activity through time, microwaves have one key advantage, according to the statement: Scientists can still observe them when it's cloudy.

In the paper, published Oct. 12 in The Astrophysical Journal, the researchers wrote that microwaves reflect the sun's average atmospheric structure above part of its atmosphere, called the chromosphere. Therefore, this finding shows that the energy available for atmospheric heating has been the same for those minimums, even if they show very different behavior at their maximums, they said.

"This is an important step in understanding the creation and amplification of solar magnetic fields, which generate sunspots and other solar activity," Shimojo said in the statement.