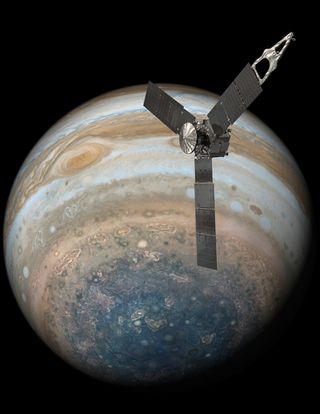 Juno's finally back in contact with Earth, confirming a successful eighth science flyby of Jupiter and sending along new data about the planet's vibrant cloud tops and composition.

The probe swung by the gas giant on Oct. 24, but because the sun was blocking the path of communication between Earth and Jupiter, researchers had to wait until Oct. 31 to hear about the spacecraft's journey. This was the eighth time Juno gathered data from the planet close up.

"All the science collected during the flyby was carried in Juno's memory until yesterday, when Jupiter came out of solar conjunction," Ed Hirst, Juno's new project manager from NASA's Jet Propulsion Laboratory in California, said in a statement. "All science instruments and the spacecraft's JunoCam were operating, and the new data are now being transmitted to Earth and being delivered into the hands of our science team." [Amazing Jupiter Photos by Juno and Citizen Scientists]

Since its arrival at Jupiter on July 4, 2016, Juno has braved the gas giant's fierce magnetic field — nearly 20,000 times the strength of Earth's and the strongest in the solar system — to send back data about the planet's weather systems, atmosphere and composition. The probe's JunoCam has also sent home spectacular images of the planet, which NASA makes available for citizen scientists to process; in fact, the public can vote on what JunoCam looks at next. The spacecraft's orbit brings it diving in toward Jupiter every 53 days.

Solar conjunctions of Jupiter — when Earth's and Jupiter's orbits take the planets on opposite sides of the sun — mean that a spacecraft orbiting Jupiter can't transmit to Earth without the charged particles the sun emits corrupting the probe's signal. The last solar conjunction of Jupiter was in September 2016, and the next will be in November 2018, according to in-the-sky.org.

Juno's next close flyby of the gas giant happens Dec. 16. The probe is currently scheduled to study Jupiter through 2018 and ultimately dive into the planet's atmosphere, although the mission could be extended, NASA officials said. In February, the team decided to keep to a slower schedule of flybys rather than switching to one every 14 days, so the probe would complete 12 science flybys by its currently scheduled end.

Editor's Note: This article has been corrected to reflect that the last solar conjunction of Jupiter was in September 2016, not August 2015.