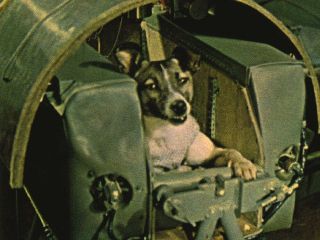 Laika, a mixed-breed dog, became the first living being in orbit when the Soviet Union launched her on the Sputnik 2 mission on Nov. 3, 1957.
(Image: © NASA)

On Nov. 3, 1957, the Soviet Union lofted a dog named Laika aboard the satellite Sputnik 2. The milestone came less than a month after the Soviets kicked off the Space Age, and the Cold War space race, with the launch of Sputnik 1 on Oct. 4.

Laika was not the first animal in space, however. That distinction goes to some fruit flies that the United States launched on a suborbital mission in February 1947. (The Soviet Union started launching dogs to suborbital space in the early 1950s.) [Photos: Pioneering Animals in Space]

Sputnik 1 was a 184-lb. (83 kilograms), beach-ball-size sphere that basically just emitted beeps as it circled Earth. Sputnik 2 was much larger and more elaborate; it weighed 1,120 lbs. (508 kg) and featured several scientific instruments, as well as a cabin for Laika, a small stray plucked from the streets of Moscow.

Sputnik 2 was a suicide mission for the poor dog; the satellite was not designed to come safely back to Earth.

Telemetry data showed that Laika survived the launch, according to Anatoly Zak of RussianSpaceWeb.com. Initially, Soviet publications claimed that the dog died, painlessly, after a week in Earth orbit. But that account has been called into question over the years.

"Decades later, several Russian sources revealed that Laika survived in orbit for four days and then died when the cabin overheated," Zak wrote. "According to other sources, severe overheating and the death of the dog occurred only five or six hours into the mission."

"With all systems dead, the spacecraft continued circling the Earth until April 14, 1958, when it re-entered the atmosphere after 2,570 orbits (2,370 orbits according to other sources) or 162 days in space," Zak wrote. "Many people reportedly saw a fiery trail of Sputnik 2 as it flew over New York and reached the Amazon region in just 10 minutes during its re-entry."

Sputnik 2's launch was one of three spaceflight events that shook the United States in 1957, causing widespread concern among Americans about the nation's technological capabilities compared to those of its Cold War rival. The other two were the liftoff of Sputnik 1 and the Dec. 6 failed launch of the 3.5-lb. (1.6 kg) Vanguard Test Vehicle 3, which would have been the United States' first satellite. (The satellite's rocket exploded, on national TV, just seconds after liftoff.)

The United States bounced back with the successful launch of the Explorer 1 satellite on Jan. 31, 1958.

It took a few more years for the first person to reach space. The Soviet Union notched that milestone on April 12, 1961, launching cosmonaut Yuri Gagarin on an orbital mission — and bringing him safely back to Earth.