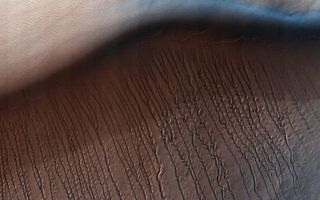 The HiRISE camera aboard NASA's Mars Reconnaissance Orbiter captured this image of sinuous gullies snaking down a Red Planet dune on Aug. 17, 2017.
(Image: © NASA/JPL-Caltech/Univ. of Arizona)

These Martian gullies may be linear, but they're far from straight.

A striking new photo by NASA's Mars Reconnaissance Orbiter (MRO) shows dozens of parallel gullies snaking their way down the face of a sand dune, like they were emplaced there by a raking giant with a shaky hand.

Why, exactly, these gullies are so squiggly remains mysterious.

"The linear gullies exhibit exceptional sinuosity (the squiggle pattern), and we believe this to be the result of repeated movement of dry-ice blocks in the same path, possibly in combination with different hardness or flow resistance of the sand within the dune slopes," NASA officials wrote in a photo description Monday (Oct. 30). "Determining the specific process that causes the formation and evolution of sinuosity in linear gullies is a question scientists are still trying to answer."

Dry ice didn't carve all of Mars' gullies and channels. Indeed, many such features — imaged by NASA's twin Viking orbiters, MRO and other spacecraft — were shaped by liquid water long ago, when the Red Planet still had a global magnetic field and a thick atmosphere.

Some of these wet environments may even have supported life. For example, NASA's Curiosity rover mission determined that the 96-mile-wide (154 km) Gale Crater harbored a long-lasting, potentially habitable lake-and-stream system billions of years ago. (Definitive evidence of Mars life still has not been found, however.)

MRO has also spotted dark streaks on steep Martian slopes during warm parts of the year. Many researchers think salty liquid water causes these features, known as recurring slope lineae, but not everyone is convinced.