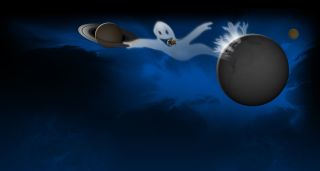 In honor of Halloween, NASA released a playlist of eerie space sounds picked up by various satellites traveling through the universe.

The playlist includes sounds from several missions to worlds such as Jupiter, Saturn and other celestial bodies in the outer solar system. Although there is no atmosphere or other medium to carry sound waves in the vacuum of space, some spacecraft instruments are able to capture radio emissions from bodies in the solar system. These emissions are then transmitted back to earth and converted into sound waves, according to a statement from NASA.

"Juno's Waves instrument recorded the encounter with the bow shock over the course of about two hours on June 24, 2016," NASA officials said in the statement.

In order to translate the radio signals captured at Ganymede, scientists used an approach called data sonification. The track titled "Beware of Jupiter's Largest Moon Ganymede" on NASA's new spooky playlist features a strong burst of noise, marking the satellites' entrance into the moon's magnetosphere, and the high pitch of the track resembles the audio from an interstellar video game.

NASA's Cassini spacecraft, which recently ended its ended its epic 13-year stint at Saturn on Sept. 15, also captured eerie-sounding radio emissions from the ringed planet. These emissions are closely related to the auroras near the poles of the planet, according to the statement.

The auroras seen at Saturn are similar to Earth's northern and southern lights and occur when solar wind material interacts with the planet's atmosphere and magnetic field. NASA's Cassini spacecraft also captured thunderous sounds from a gigantic storm on Saturn and recorded the distinct sounds heard during the probe's historic dive between planet and its innermost rings.

Other tracks from NASA's new spooky playlist feature sounds from plasma waves, a spacecraft being pelted with dust particles from a passing comet called Tempel 1, emissions from the star KIC7671081B, and radio waves in Earth's own atmosphere.

"Plasma waves, like the roaring ocean surf, create a rhythmic cacophony that — with the EMFISIS instrument aboard NASA's Van Allen Probes — we can hear across space," NASA officials said in the statement.