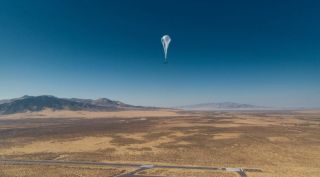 O3b owner SES said Oct. 23 that it is providing satellite capacity and a "rapidly deployable" O3b FastConnect terminal in order to connect Google Loons over Puerto Rico to the internet, which then beam 4G/LTE mobile connectivity to people on the ground.

The majority of Puerto Rico's cellphone towers were damaged or destroyed by Hurricane Maria, which struck the U.S. island as a Category 4 storm Sept. 20. The U.S. Federal Communications Commission tallied 95.2 percent of cell sites across the island were knocked out by the storm. [Hurricane Maria Photos from Space]

Google received permission from the FCC on Oct. 7 for the Loon trial run. At the time, 81.9 percent of cell towers on the island were still offline. The FCC's most recent status report, released Oct. 22, said 66.6 percent of cell sites remain down.

In an interview with SpaceNews Oct. 23, SES Networks CEO Steve Collar said Puerto Rico is the satellite operator's second time working with Google Loon, the first being in March following flooding in Peru.

Alastair Westgarth, head of Project Loon, wrote in an Oct. 20 blog post that Loon is working with AT&T to enable texting and internet access in Puerto Rico.

"We've never deployed Project Loon connectivity from scratch at such a rapid pace, and we're grateful for the support of AT&T and the many other partners and organizations that have made this possible," he wrote.

Collar said setting up the O3b link took slightly longer than SES Network's stated goal because of the complexity of the disaster response and the uniqueness of pairing satellite with Google Loon.

Emergency response officials continue to use satellite communications directly in Puerto Rico and the Gulf of Mexico to support relief efforts. Fleet operator Intelsat said Oct. 23 it is donating satellite connectivity through three Kymeta-equipped vehicles with Liberty Global Puerto Rico for the next eight weeks. The FCC says satellite-connected trucks are providing communications services in 11 counties across the island, including Arecibo, home of the Arecibo radio telescope.