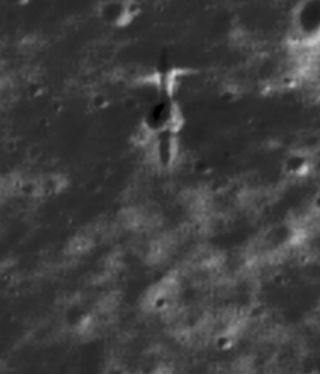 Discovery of SMART-1 impact site on high resolution Lunar Reconnaissance Orbiter images. The field is 50 metres wide (north is up). SMART-1 touched down from north to south at a grazing speed of 2 kilometres per second. This image, with west illumination, clearly shows a linear gouge of 15 metres length in the surface.
(Image: © P Stooke/B Foing et al 2017/ NASA/GSFC/Arizona State University)

The final resting place of Europe's first moon orbiter has been found at long last.

Astronomer Phil Stooke, of Western University in Ontario, discovered the 65-foot-long (20 meters) scar gouged into the lunar surface by the SMART-1 spacecraft when its controllers brought it down intentionally in September 2006.

Stooke spotted the mark in images captured by NASA's Lunar Reconnaissance Orbiter (LRO). Its location sell withexpected site of the spacecraft's grave, he said. [The Greatest Moon Crashes of All Time]

"Orbit tracking and the impact flash gave a good estimate of the impact location," Stooke said in a statement.

"Very close to that point was a very unusual small feature," added Stooke, who presented the discovery at the European Planetary Science Congress (EPSC) 2017 in Riga, Latvia, on Friday (Sept. 22).

A weak fan of lunar material ejected during the impact flanks the furrow made by the 630-lb. (287 kilograms) spacecraft, Stooke said. He added that SMART-1's landing site resembles that of NASA's Lunar Atmosphere and Dust Environment Explorer, which crashed into the farside of the moon in April 2014, as well as those of NASA's twin Gravity Recovery and Interior Laboratory probes, which hit the lunar surface in December 2012.

"The high-resolution LRO images show white ejecta, about 7 meters [23 feet] across, from the first contact," Bernard Foing, SMART-1 project scientist at the European Space Agency (ESA), said in the same statement. "We can make out three faint but distinct ejecta streams from the impact, about 40 meters [131 feet] long and separated by 20-degree angles."

The Canada-France-Hawaii Telescope, one of the observatories located near the 13,802-foot-high (4,207 m) summit of Hawaii's volcano Mauna Kea, observed the impact of SMART-1 in 2006. However, as there were no other spacecraft in lunar orbit at the time, astronomers were unable to determine its exact location for more than 10 years, Foing said. [Latest Moon Photos from NASA's Lunar Reconnaissance Orbiter]

"The next steps will be to send a robotic investigator to examine the remains of the SMART-1 spacecraft body and 'wings' of the solar arrays," Foing said.

Mark Burchell, a professor of space science at the University of Kent in England, who performed laboratory impact experiments and simulated the SMART-1 grazing impact conditions, said, "It is exciting to see for the first time the real scars from the SMART-1 impact, and compare them to the models and laboratory simulations."

ESA launched SMART-1 — whose name is short for "Small Missions for Advanced Research in Technology-1" — in September 2003. The satellite, designed and built by Swedish Space Corp., searched for evidence of ice in the craters of the moon's south pole and tested some innovative technologies for deep-space exploration, including solar-electric propulsion.