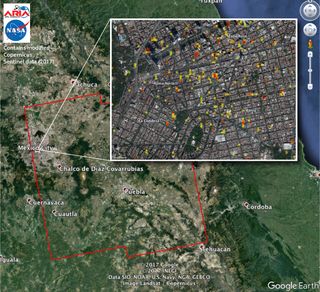 A map of damage in and around Mexico City caused by the magnitude 7.1 Raboso earthquake of Sept. 19, 2017. Color variations from yellow to red indicate increasingly more significant ground surface change. The map was produced by scientists at NASA’s Jet Propulsion Laboratory and the California Institute of Technology, based on data gathered by the European Space Agency’s Copernicus Sentinel-1A and Sentinel-1B satellites.
(Image: © NASA-JPL/Caltech/ESA/Copernicus/Google)

The magnitude-7.1 Raboso quake hit about 75 miles (120 kilometers) southeast of Mexico City. Scientists at the California Institute of Technology and NASA's Jet Propulsion Laboratory (JPL) produced the new "damage proxy map" using radar imagery of central Mexico that the European Space Agency's Copernicus Sentinel-1A and Sentinel-1B satellites gathered before and after the temblor.

"The views indicate the extent of damage caused by the earthquake and subsequent aftershocks, based on changes to the ground surface detected by radar," NASA officials wrote in a statement. [The 10 Biggest Earthquakes in History]

"The color variations from yellow to red indicate increasingly more significant ground and building surface change," they added. "The map should be used as guidance to identify damaged areas, and may be less reliable over vegetated areas."

NASA has given the map to Mexican authorities, agency officials said. A full-resolution version of it is available here: https://www.jpl.nasa.gov/spaceimages/details.php?id=pia21963

Sentinel-1A and Sentinel-1B aren't the only satellites that have been eyeing Mexico after this week's quake. The WorldView-2 satellite, which is operated by Colorado-based company DigitalGlobe, captured its own views Wednesday (Sept. 20).

The Caltech and JPL team — who work together as part of the NASA-funded Advanced Rapid Imaging and Analysis project — also created a damage proxy map after a magnitude-8.1 earthquake struck the Pacific coast of southern Mexico on Sept. 7. You can see that map, which also used Sentinel-1A and Sentinel-1B data, here: https://photojournal.jpl.nasa.gov/catalog/PIA21956