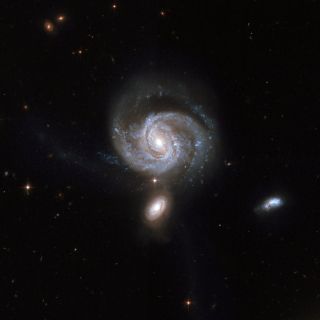 Not one but two gigantic black holes lurk at the heart of the distant spiral galaxy NGC 7674, a new study suggests.

These two supermassive black holes are separated by less than 1 light-year and together harbor about 40 million times the mass of the sun, researchers said.

If it holds up, the find would be just the second known system of double supermassive black holes. The other, announced in 2006, is in a galaxy known as 0402+379, whose two giant black holes are separated by about 24 light-years and boast a combined 15 billion solar masses. [No Escape: Dive into a Black Hole (Infographic)]

(The Laser Interferometer Gravitational-Wave Observatory project, or LIGO, has spotted the gravitational waves emitted by multiple binary black holes as they spiral toward each other. But the LIGO detections involve objects a few tens of times more massive than the sun, known as stellar-mass black holes.)

The research team analyzed observations of NGC 7674, which lies about 400 million light-years from Earth, that were made by the U.S. National Science Foundation's Very Long Baseline Array (VLBA), a network of radio telescopes across North America. The researchers found two distinct, compact sources of radio-wave emission at the galaxy's center.

"The two radio sources have properties that are known to be associated with massive black holes that are accreting gas, implying the presence of two black holes," study lead author Preeti Kharb, of the National Centre for Radio Astrophysics at the Tata Institute of Fundamental Research in India, said in a statement.

These two behemoths orbit their common center of mass about once every 100,000 years, the researchers said.

The two newfound black holes probably sidled up when their former host galaxies merged to form the current NGC 7674. (Most, if not all, galaxies are thought to have supermassive black holes at their centers.) This supposition is bolstered by the twisted, Z-like shape of the galaxy's radio emission — a large-scale structure thought to be produced by a galaxy collision, study team members said.

"Detection of a binary supermassive black hole in this galaxy also confirms a theoretical prediction that such binaries should be present in so-called Z-shaped radio sources," co-author David Merritt, of the Rochester Institute of Technology in New York, said in the same statement.

The new study was published online Monday (Sept. 18) in the journal Nature Astronomy.

This story was corrected on Sept. 22 to state that the observations were made by the Very Long Baseline Array, not the Very Large Array.