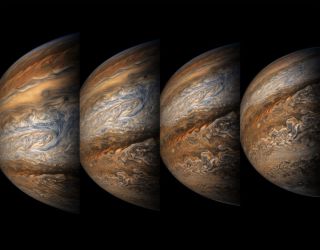 The four photos — which Juno took over an 8-minute span on Sept. 1, during its most recent close flyby of Jupiter — show the gas giant's many cloud bands and countless swirling storms (but not the famous Great Red Spot).

NASA encourages anyone to process Juno pictures in this manner. If you're interested, go to the JunoCam page here: https://www.missionjuno.swri.edu/junocam.

The $1.1 billion Juno mission launched in August 2011 and arrived in orbit around Jupiter on July 4, 2016. Since then, the spacecraft has been studying the giant planet's structure, composition, and magnetic and gravitational fields, gathering data that mission scientists say should shed light on Jupiter's formation and evolution.

Juno is in a highly elliptical orbit that brings it close to the planet once every 53.5 Earth days. The spacecraft collects most of its data during these close passes; it has now completed eight of them.

Juno is scheduled to keep studying Jupiter through July 2018, though the probe won't necessarily cease operations then; NASA could end up granting an extending mission.