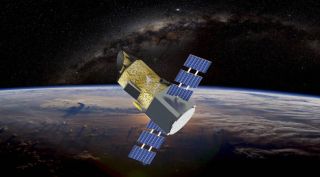 WASHINGTON — NASA has signed a Space Act Agreement with a private organization currently raising funds for studies of a space telescope designed to look for habitable planets around a nearby star.

New York-based BoldlyGo Institute announced Sept. 13 the unfunded Space Act Agreement with NASA to support development of Project Blue, a small space telescope intended to search for any Earth-like planets that may be orbiting Alpha Centauri, the star system closest to our sun.

"We're pleased to be working with NASA on this ambitious public-private partnership," Jon Morse, chief executive of BoldlyGo, said in a statement announcement the agreement. "Having access to NASA's scientific and technical expertise throughout the mission lifecycle is invaluable."

The agreement, which involves no exchange of funds, gives BoldlyGo access to NASA expertise as it develops the Project Blue spacecraft and carries out studies of Alpha Centauri. BoldlyGo will also provide both raw and processed data collected by the mission to publicly available NASA data archives.

The Project Blue mission, as currently conceived, will fly a spacecraft with a telescope 45 to 50 centimeters in diameter. The telescope will be equipped with a coronagraph designed to block the light from Alpha Centauri's two stars, allowing it to directly image any planets orbiting them. It is based on a concept called Alpha Centauri Exoplanet Satellite, or ACESat, proposed to NASA for a Small Explorer mission competition in 2014 but not selected.

"Much of the coronagraph imaging technology needed for Project Blue to take direct images of exoplanets from space has been developed through NASA-funded programs," Morse, a former director of NASA's astrophysics division, said in the statement.

The new Space Act Agreement comes as BoldlyGo makes a second attempt to raise money for initial studies of Project Blue. BoldlyGo started a fundraising campaign on the crowdfunding platform Indiegogo Sept. 6, seeking to raise $175,000 to complete engineering studies for the Project Blue spacecraft. As of Sept. 14 the campaign had raised more than $68,000, with a month remaining.

In November 2016, BoldlyGo attempted a similar crowdfunding effort, but with the more ambitious goal of raising $1 million. That effort ended in December when the campaign received $335,000 in pledges on the Kickstarter website. With Kickstarter's all-or-nothing funding model, BoldlyGo did not receive any money. Indiegogo, by contrast, has a flexible funding model that will allow BoldlyGo to receive all the money pledged even if it does not achieve its goal of $175,000.

The crowdfunding campaign, though, is only a small fraction of the overall cost of the Project Blue mission. BoldlyGo estimates the total cost of the mission to be approximately $50 million, with a launch as soon as 2021.

BoldlyGo expects to raise the bulk of the mission's cost not through crowdfunding but instead with more traditional philanthropic contributions. "We've already made initial progress in our fundraising, and in the vigorous efforts that we're embarking on we'll seek out a broad spectrum of supporters including major research foundations, individual and family foundations, corporate sponsorships, and in-kind partner contributions," the organization notes in the description of the project on its Indiegogo campaign page.

One challenge for that effort is that space science projects like Project Blue are still widely seen as in the domain of government agencies alone. Morse, speaking at the Dawn of Private Space Science conference in New York in June, acknowledged those problems.

"So far, what we have found is when we approach a lot of people, they say, 'Well, isn't NASA doing this?'" he said. "Yes, NASA is doing that, but there's room to do a lot more." Morse added that BoldlyGo was now working with a consultant to develop a program for approaching foundations for funding.

NASA, however, terminated the agreement in the fall of 2015, citing a lack of progress by B612 in developing Sentinel. The foundation said in June it was no longer pursuing Sentinel, seeking instead to work on other projects, including potential smallsat missions, to look for near Earth objects.