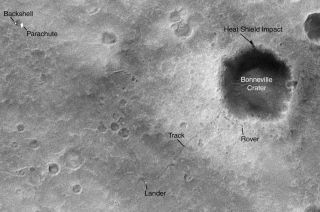 Spirit is visible next to Bonneville Crater, as are its tracks and other parts of the spacecraft that brought the rover to Mars.

PASADENA, Calif. (AP) _ A spacecraft orbiting Mars photographed one of NASA's rovers and its tracks on the surface, the space agency said Monday.

The image made by a camera aboard the Mars Global Surveyor shows a dark dot identified as the rover Spirit next to giant Bonneville Crater and the thin dark line of its tracks leading back to its lander.

The picture was made by rolling the entire spacecraft, adjusting its rotation rate to match the ground speed under the camera, a process that produces sharper images.

The maneuver "is tricky and the spacecraft does not always hit its target. However, when it does, the results can be spectacular," said Ken Edgett, staff scientist for Malin Space Science Systems of San Diego, which built and operates the Mars Orbiter Camera.

Mars Global Surveyor reached Mars in 1997 and, after adjusting its orbit, began systematically mapping the planet in 1999. It has returned more than 170,000 images.

In normal operations the spacecraft can pick out objects on the surface that are about 13 feet to 16 feet across. The roll technique allows objects as small as 4.9 feet to be seen.

Mars Global Surveyor has had a longer productive life than any other spacecraft sent to the Red Planet, according to managers at NASA's Jet Propulsion Laboratory.

This week, the spacecraft begins its third mission extension _ an extra two years funded with $15 million.