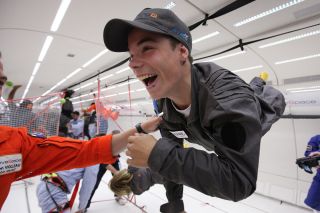 The European Space Agency (ESA) recently helped a group of eight young people with disabilities take the ride of a lifetime: a parabolic airplane flight, which re-creates the weightless environment of space.

Images from the flight, which took place yesterday (Aug. 24), show the youngsters gleefully floating in the cleared-out cabin of the aircraft. The eight children were joined on the flight by ESA Director General Jan Wörner and six ESA astronauts, according to a statement from the agency.

The kids also participated in science experiments and demonstrations to illustrate the effects of microgravity on physical systems. The demos included things like lighting a candle, mixing liquids of different densities, playing ping-pong with bubbles of water and using a fidget spinner. [In Photos: Zero-G Flight Grants Weightless Wishes for Kids]

"ESA is delighted to support this initiative," Wörner said in the statement. "Educating and inspiring as diverse [an] audience as possible, including youth, on science and spaceflight is among our priorities, and to be able to extend this to children of all capabilities is doubly rewarding."

The flight was part of the Kid’s Weightless Dreams campaign, the statement said. The campaign was organized by Novespace, a company that organizes parabolic flights, and Rêves de Gosse, an organization that arranges aviation-related projects for kids with disabilities that culminate in the youngsters taking a flight in an airplane.

Microgravity is one of the more enchanting aspects of going into space, and parabolic airplanes re-create this experience by flying in a pattern of peaks and dips. The up-and-down motion of the plane causes many people to get motion sickness, which is why NASA's parabolic airplane was long ago nicknamed "the Vomit Comet."

Two disabled adults were also present for the flight: former athlete and German television personality Samuel Koch, who is a "strong advocate for disabled causes," and Philippe Carette, "a very active Rêve de Gosse volunteer," according to the statement.