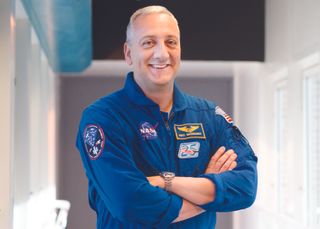 On a tour of the solar system, let former NASA astronaut Mike Massimino be your guide.

Massimino, who flew on two space shuttle missions to repair the Hubble Space Telescope, will be hosting a new series on the Science Channel called "The Planets," which premieres today (Aug. 22) at 10 p.m. EDT/PDT.

The show's eight episodes will explore the eight planets in our solar system, the dwarf planets in our system, like Pluto, and even exoplanets that orbit other stars. The first episode will take an in-depth look at Jupiter. Massimino's job will be as a kind of news anchor for an interplanetary travelogue. [Excerpt from 'Spaceman': Mike Massimino's First Spacewalk]

"It was a lot of fun to be a part of it," the former astronaut told Space.com. "On the heels of the eclipse, I'm hoping there will be a lot of interest in science, space and our solar system."

An engineer by training, Massimino said his experience in space gives some him extra perspective on the cosmos —– and it's part of the reason he wanted to host the show when Discovery Communications (which owns the Science Channel) approached him about it.

"I think my perspective of seeing things a little bit closer, getting above the atmosphere, that makes it different, having a view of [space]," he said. "[From space] you can see the cosmic ballet, between Earth, sun and moon. You learn this and you understand in a different way."

That fascination with the universe was something he wanted to transmit to other people after his stint as an astronaut, and it's one reason he teaches at Columbia University and serves as a consultant to the Intrepid Museum, he said.

As for his favorite planet in the series, he is particularly interested in Mars and the moons of Jupiter and Saturn. Mars because it's a realistic destination for human spaceflight, and the gas giant moons because some of them possess liquid water oceans and might be abodes for life, he said.

He added that the Juno space probe has made several important discoveries in the short time it's been near Jupiter, and has strengthened the case for further exploration of that system.

As for which of the worlds featured in the series Massimino would like to visit, Mars still holds the pride of place. A crewed mission to the Red Planet is something he thinks will happen eventually — it's just a matter of time.

Mars' similarity to Earth, and humanity's ability to reach the surface and examine it closely, mean that the planet can tell us a lot about the history of the solar system — and to a degree, why life evolved on Earth but not on the Red Planet.

"Mars has always been this romantic place, it's very similar to Earth," he said. "When they first formed, Earth and Mars were similar, but Earth has a magnetic field, and Mars didn't. So Mars went one direction and we went in another."

Mars currently has a weaker, less structured magnetic field than Earths, according to NASA. Our planet's strong magnetic field may have helped Earth keep its atmosphere, a critical feature for the development of complex lifeforms. NASA probes are studying the existing, weak magnetism on the Red Planet to find out if its evolution was a factor in the planet losing its atmosphere.

Mars may not have life now, but Massimino noted there is evidence for water under the soil and at the polar caps, and there might have been life there at one time.

As he sees it, astronomy is one of the few sciences that allows the average person to participate.

"You don't have to be an astronomer to appreciate it," he said. "Everyone has the possibility of looking up at the sky."

Looking up, and exploring the rest of the universe also connects us to some of the most profound questions about ourselves, he said.

"How did we get here? Are we alone? These are bigger questions that we don't have answers to yet," he said. "The only way to get answers is looking beyond our own planet and looking out into the universe."