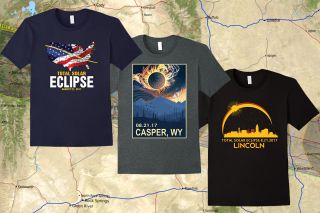 A total solar eclipse will sweep across the U.S. on Aug. 21, and millions of Americans will flock to cities along the line of totality to experience darkness in the middle of the day. Remember the Great American Solar Eclipse with these t-shirts featuring cities along the path of totality.

Why we love it: This shirt is available in men's, women's and kids' sizes in a variety of different colors.

NEXT: The rest of Oregon

Oregon is one of the best states to see the eclipse, because the weather there is most favorable. This t-shirt by Redbubble features a total solar eclipse over the state of Oregon. ($24 from Redbubble)

Why we love it: This design illustrates the path of totality over Oregon and lists several cities and towns along that path.

Casper may be the busiest city in Wyoming during the solar eclipse, as it's the state's second-largest city and is located directly in the path of totality. After watching the total solar eclipse over the mountains, remember the occasion with this cool graphic tee. ($18 on Amazon)

Why we love it: The impressionistic representation of the total solar eclipse looks pretty wild, with the sun's corona dancing around the moon.

Watching the total solar eclipse from Lincoln, Nebraska? This eclipse t-shirt features the city's skyline beneath the eclipsed sun. ($20 on Amazon)

Why we love it: This illustration doesn't show complete totality, but rather the so-called "diamond ring effect," in which a tiny bead of light is visible in the few seconds before and after totality.

Located right at the edge of the path of totality, Kansas City will only see totality for about 30 seconds. Make the magical moment last with this special Kansas City solar eclipse shirt! ($20 on Amazon)

Why we love it: This design features the Kansas City skyline beneath the solar eclipse. It also depicts a phase of the eclipse called "Baily's beads," or the diamond ring effect, in which a tiny point of light appears just before and after totality.

Carbondale, Illinois is one of the best places in the U.S. to see the total solar eclipse. Also, the placement of the "O" in the city's name makes it perfect for a solar eclipse t-shirt design! ($18 on Amazon)

Why we love it: Carbondale will experience totality for longer than any other place in the U.S. during the solar eclipse, with 2 minutes and 40 seconds of darkness. No Carbondale eclipse shirt is complete without that bit of information on there.

Nashville, Tennessee is the largest city in the path of totality and is home to many talented musicians and artists, like the locals who made this rad "Obscuratus Solis" t-shirt design! ($25 from Olivia Frankenstein)

Why we love it: There's a lot going on in this image. As the eclipse turns day into night, an owl and a flock of bats emerge from the city skyline — including the famous "Batman building" — to greet the darkness. (Disclaimer: Don't worry about the dead rising or aliens invading during the eclipse. Those are just eclipse superstitions.)

One of the most beautiful locations in the line of totality is featured on this beautiful solar eclipse t-shirt. ($20 on Amazon)

Why we love it: Rather than showing the moon in front of the sun, this shirt has a round image of the Great Smoky Mountains surrounded by the sun's corona.

The last state to see the total solar eclipse will be South Carolina. Accordingly, the last t-shirt on this list features the state's Palmetto flag with a fiery solar eclipse theme. ($18 on Amazon)

Why we love it: Ordinarily South Carolina's flag features a crescent moon, but this eclipse design is clearly way cooler!