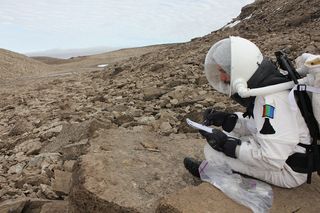 On June 22, The Mars Society launched the second phase of its ambitious Mars 160 Twin Desert-Arctic Analog simulationto study how seven crewmembers could live, work and perform science on a true mission to Mars. Mars 160 crewmember Paul Knightly is chronicling the mission, which will spend 60 days in the Canadian arctic at the Flashline Mars Arctic Research Station (FMARS) on Devon Island after completing a similar 80-day mission at the Mars Desert Research Station (MDRS) in southern Utah in 2016. Here's his fourth dispatch from the mission:

Why are we here? That's a question that all of us have encountered at some point in the buildup to the twin simulations of Mars 160. It's a fair question to ask, and you would probably get a different answer from each of us. We're all motivated for different reasons, but ultimately we are all united by a desire to see human bootprints on Mars within our lifetimes. So if any of our research over the course of Mars 160 contributes to advancing Mars exploration in some manner, then we will have succeeded and the mission will have been worth the months spent in isolation away from home.

For myself, I got involved in Mars 160 when I signed up late in 2013 to join a yearlong simulation to be carried out at FMARS as a part of the Mars Arctic 365 (MA365) mission. When I first signed up, I was fresh out of college and looking for an interesting way to combine my knowledge of geology with my love of space, without a focused research project in mind. But I soon developed a project that would fit the niche of the yearlong mission, and I applied. Several of us can trace our involvement in Mars 160 this way — Alexandre Mangeot, Anastasiya Stepanova, Yusuke Murakami, and Claude-Michel Laroche are all MA365 veterans like myself. [Inside Mars 160: The Mars Society's Red Planet Simulation in Pictures]

However, as with many things in life, things change, and so did our motivations for spending months in isolation in the arctic. In the course of planning for MA365, Mars 160 was born as an opportunity to compare two different analog sites and the type of science returned from each. Even though Mars 160 would shift the focus of the original mission we had signed up for, we quickly committed to the new goals set by the twin simulations and adjusted our projects accordingly.

In spite of all our pre-mission planning and in keeping with the spirit of the mission, there have been many things that we've encountered over the course of the mission that have piqued our interests that we hadn't originally planned on. After all, part of our mission is to fill in the knowledge gaps on what would make an actual mission to Mars run more efficiently.

Enter Alexandre Mangeot and Yusuke Murakami. Alexandre, our commander from France, is an engineer by training and is always looking for ways to improve things around the FMARS. Yusuke, from Japan, is an architect who has been traveling the world for the last decade to understand how people live and work in extreme environments. Their experiences working in extreme environments make it easier to identify problems and build better habitats for the first crewed missions to Mars. With goals like this, it is easy to see why they are such a good fit working together.

One moment of serendipitous research was spurred out of a desire by Alex to redesign the spacesuit backpacks at FMARS that have remained almost unchanged since the first missions here in the early 2000s. Teaming up with Yusuke, who brought 3D scanning equipment with him, they have built three-dimensional models of the spacesuits and are actively working to design the next generation of sim-suits that could be deployed on a future mission to FMARS. Advances in spacesuit design technology over the past decade also have allowed new tolerances to be applied to the new suit designs. This could translate to more ergonomically friendly designs that would make conducting field tasks, such as collecting geological or biological samples, easier and less burdensome.

You may ask: But couldn't these missions just as easily be performed in a laboratory setting closer to home to identify these problems? [How Will a Human Mars Base Work? NASA's Vision in Images]

Some of the engineering problems could be. But immersion in an analog environment is also important. The geology and biology here on Devon Island are similar to what one might find on Mars. The periglacial environment of the arctic and antarctic regions are the closest approximation we have on Earth to the temperatures and surface processes that dominate Mars today. This is a land shaped by the cold and ice.

The geological research of our mission has focused on periglacial features such as patterned ground that is known to occur on Mars. Study of these features in our time here has underscored how important water ice is in shaping the landscape. If a habitat is to be built in an area where the ice table is close to the Martian surface, consideration needs to be taken to how much heat is radiated out from the habitat. If heat radiation is not controlled, the heat could potentially melt the ice and render the habitat unstable.

Working in the field and in isolation also reinforces the mental conditions that astronauts on Mars would face. For this reason, a Twin EVA (extravehicular activity) study has been undertaken between both halves of Mars 160 that looks at the difference in work efficiency in field-science tasks between suited and non-suited EVAs. The study is led by Shannon Rupert — the principal investigator for Mars 160 — and through our field trials we hope to identify the strengths and weaknesses of each type of EVA, which could in turn aid in spacesuit design and procedural planning for science EVAs on future simulations and missions to Mars.

This boils down to the very essence of why these simulations are important. Would the engineering problems we've identified been noticed or investigated if it weren't for our mission? Would we be able to fully replicate what it's like to work on the surface of Mars in a spacesuit from the confines of a laboratory?

The answer to those questions is the same as to the question of why we would want to spend months on end in a small, remote habitat in the arctic. There are things to be learned about conducting a Mars mission that can only occur when immersed in a simulated mission. Mars simulations effectively supercharge the research and design efforts that ultimately feed into mission planning.

This concept of learning by immersion dates back to the days of Apollo when astronauts were training for their trips to the moon. They spent hours training in the field on Earth, donning the suits they would wear in space. In the process, they learned how to identify and sample different geological features of interest and how to perform different engineering tasks in their bulky EVA suits. Engineers were also able to tweak the suits over the course of these simulations if problems arose. As if learning how to walk in 1/6 of Earth's gravity wasn't going to be hard enough, living and working on the moon was going to be unlike anything ever experienced before. As the old saying goes, practice makes perfect. [Lunar Legacy: 45 Apollo Moon Mission Photos]

It is this legacy that we are a part of. While an exact date for a crewed Mars mission is not on NASA's (or anyone's) official schedule yet, we all hope that it will be soon. When the time comes to start training astronauts for the first series of missions to Mars, we will be ready whether we are the lucky ones to go or not. What we are learning right now at FMARS, MDRS and through related simulations is laying the groundwork for the Mars mission plans of tomorrow. The journey to Mars is just beginning.

Paul Knightly is a geologist and PhD student at the Arkansas Center for Space and Planetary Sciences at the University of Arkansas in Fayetteville. He is a member of The Mars Society's Mars 160 Twin Desert-Arctic Analog simulation, where he is conducting geological field research to better understand the arctic environment and its implications for Mars. Follow The Mars Society on Twitter at @TheMarsSocietyand on Facebook. Original article on Space.com.