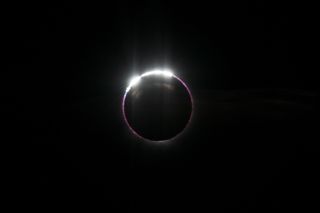 During a solar eclipse, skywatchers get quite a show. As the moon crosses in front of the sun, it affects the light streaming from the star, and various phenomena occur. Some, such as the sun's corona, appear only during a total eclipse, while others, such as Baily's beads, reveal themselves during both total and annular eclipses. Let's take a look at the show the sun and moon will provide. Remember, it is not safe to look at an eclipse without eye protection.

Baily's beads are visible during both total and annular eclipses. These phenomena appear because the moon isn't a smooth disk, but is instead covered with mountains and valleys. Light streaming from the sun is broken up into a band of spots or beads revealed around the rim.

Baily's beads generally last for only a few seconds. However, according to Space.com's Skywatching columnist, Joe Rao, along the edge of the shadow path, "the beading effect can last for nearly a minute before the start of totality and for a similar interval as the sun begins to emerge."

"As with many cases in science, Baily was not the first person to observe or explain the effect," Kevin Schindler, Lowell Observatory public information officer and a historian, said on the observatory's website. Sir Edmond Halley spotted the beads during an eclipse on April 22, 1715. They were also observed from Edinburgh during the 1737 annular eclipse and from America in 1780, according to excerpts from the book "Observe Eclipses!" by Michael Reynolds and Richard Sweetsir, posted online by the Association of Lunar and Planetary Observers.

The beads slowly disappear as the moon continues to cover the disk of the sun. The last bead left, combined with the atmosphere of the sun still visible around the moon, looks like a giant diamond ring. The atmosphere, or corona, creates a brilliant white band around the dark body of the moon. As with the beads, it is not safe to look at the diamond ring without eye protection. It appears only during a total solar eclipse.

Like so much of a solar eclipse, Baily's beads and diamond rings have scientific merit. By measuring beads and rings from different locations along the path of the eclipse, researchers can precisely measure small variations in the diameter of the sun.

"In the past, observers were often lined up across the predicted edges of total eclipse paths to determine their locations, and from them, the size of the sun," astronomer and eclipse hunter David Dunham, of KinetX Aerospace, told Space.com by email. Since 1970, Dunham has measured Baily's beads and diamond rings for 16 eclipses, with the 2017 eclipse set to be his 17th observation. While his previous observations have been almost completely visual, Dunham said he hoped to make use of widely available technology during the 2017 eclipse.

"We want to repeat such efforts on Aug. 21, but now with everyone using smart phone cameras, to video record the beads and diamond ring from multiple locations near the path edges," Dunham said.

With the bright body of the sun covered by the moon, the fainter solar corona glows in all its glory. The far brighter light streaming from the body of the sun usually outshines the corona, which is about the same brightness as the full moon.

Unlike Baily's beads and the diamond ring, the solar corona can be safely viewed without protective lenses. It will be visible for only a minute or two before the moon moves on, uncovering the sun once again. During a total solar eclipse, a growing crescent will appear on the opposite side from where the Baily's beads first disappeared.

"This crescent is the lower atmosphere of the sun, beginning to peek out from behind the moon, and it is your signal to stop looking directly at the eclipse," according to NASA's eclipse eye-safety website.

With the re-emergence of the sunlight, observers can see the diamond ring and Baily's beads appear in reverse order as the moon wraps up its eclipse of the brighter sun.