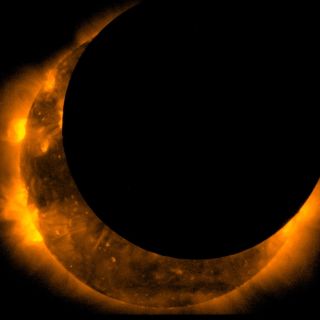 The Hinode spacecraft captured this stunning image of the maximum solar eclipse on May 20, 2012, which darkened the sky in parts of the Western United States and Southeast Asia, according to NASA.
(Image: © Hinode/XRT)

If the sun were just a little bit bigger or the moon a bit farther away, total solar eclipses may never occur. But they do, and it turns out this celestial phenomenon that has changed human history, and our perspective of the universe, may be a sheer coincidence.

Total solar eclipses, when the moon nearly perfectly covers the sun, have fascinated humans since at least the time of the earliest civilizations. Some of the very oldest historical records, written on clay tablets in Babylonia around 2,500 years ago, are devoted to observations of eclipses. Astronomers at the time interpreted the events as omens of disaster, while folktales around the world typically explained eclipses as a conflict between the sun and a devouring celestial dragon, wolf or rat.

A few solar eclipses have even changed human history — for instance, by affecting the outcome of a pivotal ancient battle, or by inspiring scientists as they unlocked the secrets of humanity's place in the universe. That's a lot of responsibility for a phenomenon that astronomers sometimes describe as "a celestial coincidence." After all, that's what a total solar eclipse really is: a total coincidence.

"The [diameter of the] moon is almost exactly 400 [times] smaller than the sun's diameter, and the sun is almost exact 400 times further away than the moon," said Mark Gallaway, an astronomer at the University of Hertfordshire in the United Kingdom. "The consequence of this is that the angular diameter, or the size we see, of the sun and the moon in the sky are almost exactly the same.” [The 8 Most Famous Solar Eclipses in History]

Such a nearly perfect match wasn’t always the case, however. Because the distance between the moon and the Earth is slowly changing, solar eclipses looked very different millions of years ago — and they will again, tens of millions of years in the future.

"It's a beautiful coincidence — life has been on Earth for about 400 million years, and we're living in this little window of time where this is happening, which is pretty amazing," Gallaway told Live Science.

"When we start out by calling it a coincidence that the disk of the moon and sun appear to be very similar in size, we're setting up a puzzle where one probably doesn't exist," Scharf told Live Science. "The 'coincidence' is not so very great — it is approximate and it varies depending on the timing of the eclipse and the lunar orbit."

Gallaway added that just as the Earth orbits the sun in an elliptical path, not circular, the moon's orbit of the Earth is also elliptical, differing by around 6 percent from a perfect circle. As a result, the changing distance between the Earth and the moon can make a big difference in the appearance of each eclipse seen from the Earth's surface, he said.

"When the moon is at its furthest, we will get what's called an annular eclipse," Gallaway said, which is an effect also known as "the ring of fire," when the apparent size of the moon is slightly smaller and the solar disk is visible around the moon's edge.

In addition, the moon is very slowly moving farther away from Earth, an effect caused by the bulge of the Earth's ocean tides slowly dragging the moon into a slightly faster and higher orbit. (The same mechanism is causing Earth's rotation to slow down, making the days longer by a very small fraction of a second each year.)

"At the moment, the moon is slowly moving away from the Earth at about the rate your finger nails grow," Galloway said, "so in a few tens of millions of years, we will stop having eclipses like this." [Sun Shots: Amazing Eclipse Images]

Solar eclipses would also have looked very different in the distant past, when the moon was much closer to Earth and appeared much larger, Gallaway said. (Though perhaps at that time, only dinosaurs would have been around to see it.)

"The moon would have completely covered the sun [at totality of the eclipse], so we wouldn't get all these weird effects like Baily's beads and the diamond ring effect," he said.

Baily's beads are points of light sometimes seen when the sun reappears from behind the moon. Sunlight flooding through lunar mountains and valleys causes the phenomenon. The diamond ring is a similar effect but on a much larger scale, occurring when light from the emerging sun flares out along one side of the moon's disk, Gallaway said.

Although some solar eclipses have played an important role in science, such as the 1919 eclipse that helped verify Einstein's theory of general relativity, these celestial events don't always hold much scientific interest today, he said.

"Eclipses are one of the most well-examined things in science. We know how they work, and to be honest, we're just going out there because we like to see eclipses," Gallaway said.

A few eclipse-related phenomena here on Earth are not fully understood, however, he said. "Weird things happen with shadows, for instance. They look striped during eclipses, which could be because the sun is no longer a point source and everything is effectively illuminated by a circle," Gallaway said.

Scientists have also carried out experiments to determine if the perceived drop in temperature reported by many eclipse observers is real or a psychological effect, he added.

"The fact that birds stop singing — that's also very odd. And the air is reported to go a purple color, possibly because this is a type of lighting source that we've never experienced before," Galloway said.

Still, the human experience of eclipses is of special interest to Kate Russo, a psychologist and author who has written three books on the topic. Her latest book, "Being in the Shadow: Stories of the First-Time Total Eclipse Experience" (Being in the Shadow, 2017), was released earlier this month.

"A total solar eclipse is unlike any other astronomical event — changes happen above you, around you and within you," Russo told Live Science in an email.

"Totality occurs because of the coincidence in scale, allowing the moon to fully block the sun. But what makes totality so special is how immersive the experience is. It is otherworldly and awe-inspiring on a scale never seen before. You don't 'see' a total eclipse. You 'experience' it," Russo said.

REMEMBER: Looking directly at the sun, even when it is partially covered by the moon, can cause serious eye damage or blindness. NEVER look at a partial solar eclipse without proper eye protection. Our sister site Space.com has a complete guide for how to view an eclipse safely.