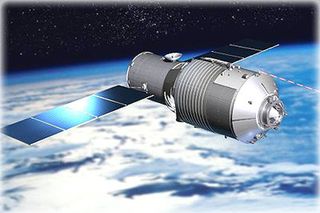 Artist's illustration of China's 8-ton Tiangong-1 space lab, which is expected to fall to Earth late next year, unless it's boosted to a higher altitude.
(Image: © CMSE)

The United Nations Office for Outer Space Affairs (UNOOSA) has reissued a notification by China on the future uncontrolled re-entry of the country's robotic Tiangong-1 space lab, which is expected to take place in the next eight months. A follow-up update from the Aerospace Corporation predicted the space lab could fall to Earth as soon as February.

Tiangong-1, which has been orbiting Earth since September 2011, ceased functioning on March 16, 2016. To date, the spacecraft has maintained its structural integrity.

The space lab's operational orbit is under constant and close surveillance by China. Its current average altitude is 217 miles (349 kilometers), but its orbit is decaying at a daily rate of approximately 525 feet (160 meters), according to the U.N. notification. [Gallery: Tiangong 1, China's First Space Laboratory]

The lab's re-entry is expected between October 2017 and April 2018, according to the U.N. The Aug. 2 notice from the Aerospace Corporation pegged re-entry as occuring in January 2018, with a margin of two months on either side. According to the calculations and analysis that have been carried out, most of Tiangong-1's structural components will be burned up during the craft's re-entry into Earth's atmosphere.

"The probability of endangering and causing damage to aviation and ground activities is very low," the notification adds.

The notice advises that China attaches great importance to the re-entry of Tiangong-1 and will take the following measures to monitor its fall and provid public information:

— China will make use of the international joint monitoring information under the framework of the Inter-Agency Space Debris Coordination Committee in order to be better informed about the descent of Tiangong-1.

— China will improve the information reporting mechanism. Dynamic orbital status and other information relating to Tiangong-1 will be posted on the website of the China Manned Space Agency in both Chinese and English. In addition, timely information about important milestones and events during the orbital decay phases will be released through the news media.

— As to the final forecast of the time and region of re-entry, China will issue the relevant information and early warning in a timely manner and bring it to the attention of the United Nations Office for Outer Space Affairs and the Secretary-General of the United Nations through diplomatic channels.

Tiangong-1 was launched into Earth orbit on September 29, 2011. It conducted six successive rendezvous and dockings with the spacecraft Shenzhou-8 (uncrewed), Shenzhou-9 (crewed) and Shenzhou-10 (crewed) as part of China's human space exploration activities. The vehicle weighed 18,740 lbs. (8,500 kilograms) at launch.

According to the Aerospace Corporation, based on Tiangong-1's inclination, the lab will re-enter somewhere between 43 degrees north and 43 degrees south latitudes. As for leftovers, "it is highly unlikely that debris from this reentry will strike any person or significantly damage any property," Aerospace Corporation representatives wrote in a Tiangong-1 re-entry FAQ.

They added: "Potentially, there may be a highly toxic and corrosive substance called hydrazine on board the spacecraft that could survive re-entry. For your safety, do not touch any debris you may find on the ground nor inhale vapors it may emit."

The Aerospace Corporation will perform a person and property risk calculation for the Tiangong-1 re-entry a few weeks prior to the event.

Editor's note: This story was updated Aug. 6 to include new re-entry predictions from the Aerospace Corporation.