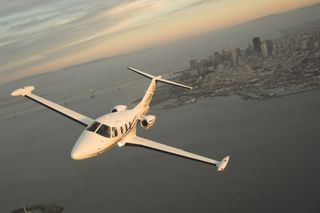 Eclipse Aviation's EA-500 has garnered more publicity than any other very light jet and its developer Vern Raburn is widely regarded as the motivating force for the new breed of VLJs.
(Image: © Eclipse Aviation.)

Since thedawn of the jet age the ultimate idea of luxury for many people has been to owna private jet, but for almost everyone the dream has been far beyond financialreach.

Now, however,the dream of owning a private jet--or at least flying regularly in one--looksachievable, thanks to innovative new airplane designs and technologies.

The pricemay still raise eyebrows for many, but if you have about $1.5 million andplenty of time for some pretty intense pilot training, a personal private jetis well within reach.

You mightthink that still sounds like a lot of money, but it's nowhere near as much asyou previously would have had to pay for a new, high-altitude private jet ableto fly you a thousand miles in just three hours.

Now, a new class of small jetsis coming to market. Most are designed for single-pilot operation, though toqualify for solo flying, inexperienced jet pilots must undergo intensivetraining followed by a period of supervised flying with a professional 'mentorpilot.' Thementor will advise on technique, monitor performance and recommend additionaltraining as needed.

The verylight jet--or VLJ, in industry-speak--is so cheap in business aviation terms thatit's affordable to the merely well-off and is not purely a very rich person'splaything or the exclusive privilege of a big-company CEO.

About adozen companies are developing VLJs. New-aircraftprices vary from the $1.36 million that Diamond Aircraft is asking for itsfive-seat D-Jet to around $3 million for some seven-to eight-passenger VLJs.

While the Ontario, Canada-builtD-Jet is the cheapest VLJ, other models may become better known. One is theCessna Citation Mustang, the new baby of the Citation bizjetrange.

Cessna hasbuilt thousands of Citations over the last 36 years but the Mustang is a newdesign. The first customers are now receiving their Mustangs for around $2.6million apiece.

Another VLJis the HondaJet, a seven-seat jet being built in North Carolina by thebig car maker as its first foray into the business aviation market. TheBrazil-based airliner manufacturer Embraer isdeveloping a seven-seat VLJ, the Phenom 100.

Even betterknown is the Eclipse Aviation EA-500. Eclipse was only established in the late1990s, but its founder Vern Raburn--an early-dayssenior Microsoft executive close to both Bill Gates and Paul Allen--quicklyachieved cult-like status among private flyers with his promise to build a jetcosting under $1 million.

Raburn'svision hasn't turned out quite that way, since his aircraft now costs over $1.5million. Eclipse has also had teething troubles and delivered the first EA-500in recent months, rather later than planned. (It isn't the only VLJmanufacturer to experience early problems: The first Citation Mustangs sufferedfrom avionics software glitches.)

But Raburn is seen as the father of the VLJ. At Eclipse, hecreated a formidable marketing machine that has garnered a wealth of publicityfor the EA-500 and the VLJ concept.

"Vern isnot the first person to build or even propose a light jet," said Nigel Moll,editor of the monthly edition of business aviation bible AviationInternational News.

In 1977,entrepreneur Tony Fox proposed the Foxjet 600five-passenger jet and built full-scale models, Moll noted. But neither the Foxjet nor Ian Chichester-Miles'four-seat Leopard (flown in Englandin 1988) were produced.

"What Vernis, is the motivator for the current crop of them," said Moll. "Various crucialthings converged ... and Vern figured it was time to take a big step."

Particularlycrucial were the development of small jet engines to power VLJsand business travelers' increasing dissatisfaction with airline flying after9/11.

Even if youcan't afford a private jet, you might soon be able to afford to take a businesstrip on one. The affordability of VLJs has inspired aclutch of new companies that plan to offer short-haul service linking localairports throughout the United Statesand Europe.

Theseoperators are trading on the idea that business travelers will pay firstclass-plus fares for the convenience of avoiding long security lines at airlinehubs and flying to their meetings and back inside a day. They have developeddifferent business models that vary from whole-aircraft charters to bookingindividual seats on nearly a scheduled-service basis.

But takenote: Some of the smaller, less expensive VLJs suchas the EA-500 don't have toilets. Ask what plane you're flying before orderingthat cup of coffee at the airport.