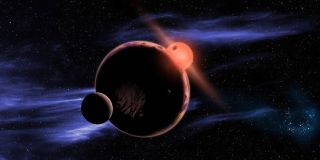 An artist's concept of a red dwarf star with an imagined exoplanet system, where a planet with two moons orbits the habitable zone of the star.
(Image: © NASA/D. Aguilar/Harvard-Smithsonian Center for Astrophysics)

The Red Dots campaign, in which astronomers scan the night sky to discover planets around some of the nearest stars to Earth, began focusing on one of the sun's closest cousins, Barnard's Star, Sunday (July 16).

Jorge Zuluaga from the Universidad de Antioquia in Colombia and Abel Méndez, director of the Planetary Habitability Laboratory of the University of Puerto Rico, will be leading the observations. They are coordinating with researchers from other observatories around the world, such as the Sierra Nevada Observatory in southern Spain. [Weird Radio Signals Detected from Nearby Red Dwarf Star]

These findings will allow Zuluaga and Méndez to understand Earth's stellar neighbor, Barnard's Star. Like the closest star to Earth's sun — Proxima Centauri — Barnard's Star is a red dwarf. They are the smallest category of stars, and their diminutive size means they are dimmer and colder than the sun. An exoplanet near Barnard's Star is likely a frigid body, according to the statement, and past observations indicated there might be a cold exoplanet exerting its gravitational pull on the star.

"Red dwarfs, such as those observed by Red Dots and the campaign Abel and I established this year in Arecibo, have intense magnetic fields, at least for their size," Zuluaga shared with Space.com via email. Hypothetically, if another type of star with a weaker magnetic field did have a planet, it would not show signs of the planet's existence as clearly as a red dwarf would, according to him. "The chances to observe the effect of a magnetized planet on the [red dwarf] star are larger than in the case of other type of stars," Zuluaga said.

If the various observations indicate a previously unknown planet is indeed orbiting Barnard's Star, the Red Dots team will have to scan the system further by using European Southern Observatory's exoplanet-hunter to confirm the exoplanet's existence, the researchers said.

However, the characteristics of red dwarf stars make it less likely that an exoplanet would be home to life, according to Zuluaga.

"A larger magnetic field produces a more intense stellar activity," Zuluaga said. "As a consequence, red dwarfs may affect significantly the habitability of their planets." By observing the radio emission from an active red dwarf, Zuluaga said he believes scientists can come to understand the environment of the hypothetical planets.

The Red Dots campaign has stated that this project is special for many scientific collaborators because Arecibo Observatory holds an honored place in science fiction literature, one of which is the observatory's reference in Carl Sagan's novel "Contact" (Simon and Schuster, 1985): The Arecibo telescope is the setting for Dr. Ellie Harroway's first step in her search for extraterrestrial intelligence.

The only previous time Barnard's Star was studied from Arecibo was during the SETI Institute's Phoenix Project, which lasted from 1998 to 2004. The new observations are in a different frequency (4 to 5 GHz) where radio emissions from stellar flares have been observed in other similar or cooler objects. This is the first time Barnard's Star will be seen with the updated sensitivity of telescopes across the world, according to the statement.