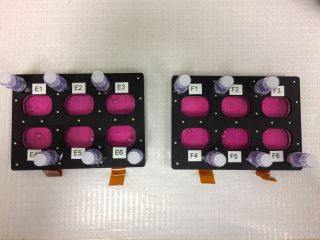 New drugs in development on the International Space Station would target cancer cells and cause fewer side effects than chemotherapy. This six-well BioCell will culture the cancer cells.
(Image: © BioServe Space Technologies)

Microgravity research on the International Space Station may give new insights into fighting cancer, NASA said.

A new investigation in space is trying build a drug to to help the immune system kill cancer cells , which would prevent a given type of cancer from happening again in a patient. Investigators hope to make this possible using a new drug and antibody combination that could decrease the nasty side effects (such as nausea and hair loss) that are common with patients using chemotherapy, NASA officials said in a statement.

While chemotherapy is effective in treating cancer, the treatment unfortunately kills healthy cells along with the unhealthy ones. The new approach targets only cancer cells by combining an antibody with azonafide, a cancer-killing drug. Investigators said they are hopeful that the new combination will cause less severe issues than those associated with chemotherapy, though the treatment will still have side effects. [Benefits of Cancer Research on Space Station Explained (Video)]

"One of the reasons cancer cells grow in certain individuals is their defense mechanism fails to recognize" the cancer cells, co-investigator Dhaval Shah, an assistant pharmaceutical sciences professor at SUNY Buffalo in New York state, said in the statement.

"This [new] molecule also has the ability to wake up, or release the brake on existing immune cells within the cancer," Shah added. "In any given tumor, when these molecules are released [from the cancer cell], they 'wake up' the surrounding immune cells and stimulate the body's own immune system, making it recognize and kill the cancer cells itself."

Doing cancer research on the International Space Station provides other benefits as well, he said. The microgravity environment better simulates the human body, because you can grow large, spherical cancer tumors, Zea said.

Also, future explorers heading to Mars are at an increased risk of cancer due to radiation. This research could provide insights into how effective these drug combinations are in microgravity, which would be helpful if the illness happens to occur in astronauts en route to Mars or returning home, NASA stated.

"We don't know if the cells will be metabolizing the drug at the same rate as they do on Earth," said Shah. "In the long term, we need to be sure what drugs are going to work."

The investigation is called "Efficacy and Metabolism of Azonafide Antibody-Drug Conjugates (ADCs) in Microgravity." More information about microgravity investigations can be found @ISS_Research.