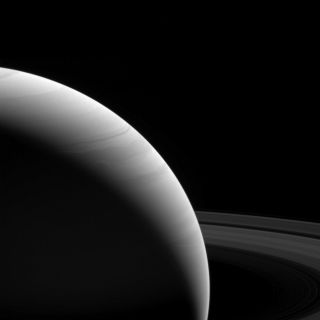 This is what dawn on Saturn looks like, from afar.

The ringed planet is partly hidden in darkness and partly illuminated by the faint light of a distant sun in a gorgeous photo taken by NASA's Cassini spacecraft.

"The light has traveled around 80 minutes since it left the sun's surface by the time it reaches Saturn," NASA officials wrote in a description of the image, which was released yesterday (July 10). "The illumination it provides is feeble; Earth gets 100 times the intensity, since it's roughly 10 times closer to the sun. Yet compared to the deep blackness of space, everything at Saturn still shines bright in the sunlight, be it direct or reflected."[Cassini's Saturn 'Grand Finale' Plan in Pictures]

The $3.2 billion Cassini-Huygens mission — a joint effort of NASA, the European Space Agency and the Italian Space Agency — has been orbiting Saturn since July 2004, but its days are numbered: The spacecraft is scheduled to plunge into the gas giant's cloud tops on Sept. 15, in an intentional death dive designed to ensure that Cassini doesn't contaminate the Saturn moons Titan or Enceladus with microbes from Earth. (Both Titan and Enceladus may be capable of supporting life, scientists have said.)

Huygens was a piggyback lander that separated from the Cassini mothership and made a historic touchdown on Titan in January 2005 — the first soft touchdown ever achieved on a body in the outer solar system.