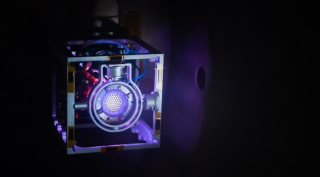 WASHINGTON — A pair of French entrepreneurs have raised 1.7 million euros ($1.9 million) for a new electric propulsion system to address the small satellite market.

ThrustMe, a startup formed in February by Ane Aanesland and Dmytro Rafalskyi, two researchers from France's Ecole Polytechnique plasma physics laboratory and CNRS, the French National Center for Scientific Research, raised the money from Kima Ventures and a collection of U.S. and European angel investors in order to fund a technology demonstration in the next 18 months. The startup also plans to use the funding to double its headcount to 14 and to secure customers.

In a June 16 statement, ThrustMe said the new capital builds on 2 million euros ($2.2 million) in previously awarded government research and development grants. ThrustMe claims that its electric thruster has double the thrust of a regular miniaturized electric propulsion system at only 40 percent the size. The company says its thrusters are also simpler to integrate into a satellite.

"By going back to the basics of electric space propulsion, we solved the hurdles in miniaturization, with a technology which holds the tremendous potential to improve electric propulsion system for satellites, including the larger ones," said Dmytro Rafalskyi, ThrustMe co-founder and chief technology officer.

Xavier Apolinarki, president of Société d'Accélération du Transfert de Technologies Paris-Saclay, a French company that helps to spin off public academic research projects into companies, said ThrustMe has "worldwide exclusive rights" from Ecole Polytechnique and CNRS to the patents for the propulsion technology formed from research there. Aanesland and Rafalskyi invented the patented technology.

"After 18 months funding the transformation of this scientific research project at Ecole Polytechnique into a commercial venture, SATT Paris-Saclay is proud and excited to continue the adventure with ThrustMe by becoming a shareholder, a very first time for SATT Paris-Saclay," Apolinarki said in a prepared statement.

The company counts Jean-Jacques Dordain, the former president of the European Space Agency, and Robert Lainé, the former chief technology officer of EADS Astrium (now Airbus Defence and Space) as members of its advisory board. Dordain, who led ESA from 2003 to 2015, described ThrustMe as "one of the most innovative and promising startups in Europe."

Another former Airbus Defence and Space employee, Hélène Huby, who was head of innovation, is one of ThrustMe's angel investors.

"I also believe that we must all help the economy of the European new space ecosystem to grow alongside the American one," she said, echoing comments made by other European space leaders on the gap between U.S. and European entrepreneurship in space. European policy makers have taken additional steps to encourage NewSpace entrepreneurism in Europe, such as providing funding through the Horizons 2020 program, in an effort to close that gap.