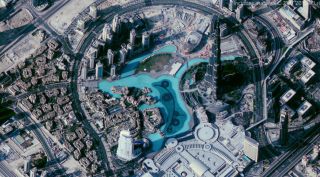 Earth-i captured this image of Dubai, United Arab Emirates, with a satellite in its DMC-3 constellation.
(Image: © Earth-i)

SAN ANTONIO, Texas — Earth-i Ltd., a British Earth imaging company, plans to launch a satellite late this year to capture high-resolution, video imagery in color and pave the way for a constellation of similar spacecraft.

"What does full color video from space bring us? We don't have all the answers," said Richard Blain, Earth-i chief executive. "But part of our job is to start seeding the market with that capability to then see not only what we can develop but also what other scientists and technicians all over the world can develop."

Currently, Earth-i operates the DMC constellation of three Earth observation satellites in low Earth orbit offering still imagery with a resolution of less than one meter. The DMC3 satellites were built by Airbus subsidiary Surrey Satellite Technologies Ltd. and launched in July 2015.

Earth-i has nearly completed construction on a second prototype, called EiX, for the new constellation. The company plans to launch EiX in the fourth quarter of 2017. Blain declined to comment on the launch vehicle that will send the EiX satellite into orbit.

"Because we are getting full color, full motion video from space for the first time, there is a reasonable amount of work to do to understand how to optimize the use of that video and the transfer of data either through some preprocessing on the spacecraft or more heavily on the ground," Blain told SpaceNews at the 2017 GEOINT Symposium.

In early 2019, Earth-i plans to launch five commercial satellites for its new constellation into 500-kilometer polar orbits. Those satellites will provide customers with views of every area of the globe multiple times per day, Blain said. "We anticipate launching in further batches of five depending on how the demand grows," he added.

Earth-i's new constellation will allow customers to task the onboard imager to gather still or video imagery of targets of interest. The imagers are designed to remain focused on a target as the satellite passes over it, capturing videos of 25 to 30 frames per second, Blain said.

Earth-i formed in 2013 as a privately-funded spinoff from Aerospace Resources Ltd. of Belmont, United Kingdom.