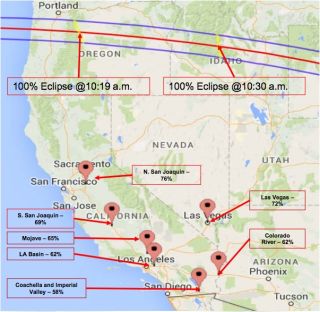 The solar eclipse won't pass directly over California, but it will still affect the state's solar energy grid, particularly from 10:19 a.m. to 10:30 a.m. local time on Aug. 21.
(Image: © California ISO)

A total solar eclipse that will sweep across the United States on Aug. 21 is expected to make a noticeable dent in solar-energy collection, prompting energy workers to concoct workarounds that will help them meet energy demands while the eclipse passes overhead.

Utility workers already have a game plan in California, where 9 percent of electricity came from utility-scale solar plants in 2016.  During the eclipse, when the sun disappears behind the moon, utility workers plan to ramp up energy output from other sources, including from hydroelectricity and natural gas, and then quickly reintroduce solar power as the sun reappears.

In all, California's residents shouldn't notice a difference in their power supply during the duration of the eclipse, said Steven Greenlee, a spokesman for California Independent System Operator (ISO), an nonprofit that manages California's power grid. [Sun Shots: Amazing Eclipse Images]

Even though the eclipse isn't passing directly over California — it's traveling in a curved path from Oregon to South Carolina — it will still affect the Golden State, which has nearly half of the nation's solar-electricity-generating capacity, according to the U.S. Energy Information Administration.

"The solar eclipse is farther north of us, but we will see between 50 [percent] and 75 percent of solar production from our solar plants reduced during that [time]" Greenlee told Live Science.

The state is expected to lose almost 4,200 megawatts during the eclipse, which will partially darken the state from about 7:45 a.m. to 12:45 p.m. local time, with peak occlusion happening from 10:19 a.m. to 10:30 a.m. local time on Aug. 21, according to the ISO. To put that in perspective, 1 megawatt powers about 1,000 typical homes, so the eclipse could affect the equivalent of about 4.2 million homes, Greenlee said.

In addition, units that rely on power from rooftop solar panels will go offline, "which means that those mostly residential units will then look to the grid for their power support," Greenlee said.

"[The 6,000 megawatts] is the amount of megawatts that we expect that we'll have to generate to make up for the effect of the solar ellipse," Greenlee said. "For us here at the ISO, we're going to need to make sure that we have our reserves properly procured," which involves having 100 percent of the expected demand plus an additional 6 percent in reserves, just in case, he said.

The ISO is talking with other energy providers, particularly natural gas, which provides about 53 percent of California's energy resources, Greenlee said. This way, the generators will know that they'll need to acquire more natural gas for the morning of the eclipse.