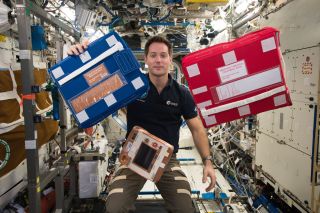 If an emergency medical situation arises during a crewed trip to Mars, odds are that the astronauts helping out will have little medical training. Making things even more challenging, the astronauts will be far from home working only with the limited supplies on board — a task that would be difficult for even experienced doctors.

Astronauts could potentially break bones, develop blood clots, or find themselves dealing with other unexpected medical situations. Such scenarios have occurred in isolated environments, as when physician Jerri Nielsen found herself treating her own breast cancer after identifying a lump in her breast during winter at the South Pole’s scientific station in 1999. Before she could be airlifted to other medical care, she worked with a welder to perform a biopsy at the station and managed her own hormone and chemotherapy injections by conferencing with doctors in the US.

Astronauts dealing with a medical emergency in space would have to display similar resourcefulness.

"During these long duration flights, the estimated risk of severe medical and surgical events, as well as the risk of loss of crew life are significant." said Matthieu Komorowski, a consultant in intensive care and anesthesia at London’s Charing Cross Hospital, in a statement. "The exposure to the space environment itself disturbs most physiological systems and can precipitate the onset of space-specific illnesses, such as cardiovascular deconditioning, acute radiation syndrome, hypobaric decompression sickness and osteoporotic fractures."

For example, the microgravity environment of space tends to weaken bones over time, leading to osteoporotic fractures. Astronauts are also exposed to radiation and at risk for decompression sickness, given that they depend on a pressurized environment.

Komorowski has direct experience working in isolated environments. In 2014, he served as the on-site doctor for a two-week mission to the Mars Desert Research Station (MDRS), a Mars Society facility in Utah where mock astronaut teams simulate procedures and experiments for the Red Planet. (Komorowski and I were crewmates on the project.)

Komorowski did a medical study on site where untrained crew members were taught to insert tubes in a mannequin, simulating a common medical procedure. A study based in part on this work was published in 2014 in Extreme Physiology & Medicine.

It's possible that on such a long voyage to Mars, even the doctor could get ill on the trip. Komorowski advocates for a few ways to deal with such a situation.

The first is to have duplicated skills among the crew, which means requiring that everyone have at least basic medical training. The second — although less accessible on a trip to Mars — would be telemedicine. Given the minutes-long time lag between Earth and Mars communications, there would be little opportunity for a conference call in an emergency.

There also are preventative steps that can be taken, such as having on-demand 3D printing of medical equipment, or matching crew members by blood type — an easier solution for transfusions, since the right blood type would be available for everyone.

Komorowski also cautioned that in some cases it may be best not to make an attempted medical intervention, especially if a lot of consumables would be used on a medical procedure where the person is not likely to survive.

"During future space exploration missions, the crew must prepare for non-survivable illnesses or injuries that will exceed their limited treatment capability," he said.

Even common procedures, such as cardiopulmonary resuscitation (CPR), may require a rethink in space. After all, you can't use your body weight in microgravity, and there are restrictions on how much medical equipment you can take on board.

After testing CPR techniques aboard aircraft and underwater space simulators, a team led by Jochen Hinkelbein suggests that the "hand-stand technique" is the most effective method for CPR in space. Alternatively, especially in a microgravity environment, wrapping the legs around the patient (called the Evetts-Russomano method) while performing compressions will stop them from floating away.

"Since astronauts are selected carefully, are usually young, and are intensively observed before and during their training, relevant medical problems are, fortunately, rare in space," said Hinkelbein, executive senior physician of anesthesiology and intensive care at the University Hospital of Cologne in Germany, in a statement.

"However, in the context of future long-term missions, for example to Mars, with durations of several years, the risk for severe medical problems is significantly higher," added Hinkelbein, who is also president of the German Society for Aerospace Medicine. "Therefore, there is also a substantial risk for a cardiac arrest in space requiring CPR."

Emergency medicine in space was recently discussed at this year's Euroanaesthesia congress, which was held in Geneva, Switzerland, from June 3 to June 5.