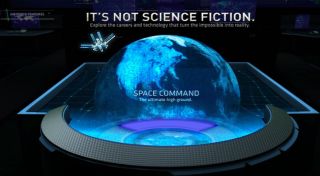 Space is regarded as the "the ultimate high ground" in military engagements.
(Image: © US Air Force)

The United States' top intelligence official spotlighted the threat of space warfare in a hearing of the Senate Select Committee on Intelligence last week.

In his written testimony in the May 11 hearing, Dan Coats, director of national intelligence, reviewed the worldwide threat assessment of the U.S. intelligence community, noting an appraisal that "Russia and China perceive a need to offset any U.S. military advantage derived from military, civil, or commercial space systems and are increasingly considering attacks against satellite systems as part of their future warfare doctrine."

Coats reported that both Russia and China "will continue to pursue a full range of antisatellite (ASAT) weapons as a means to reduce U.S. military effectiveness." [The Most Dangerous Space Weapons Ever]

Some new Russian and Chinese ASAT weapons, including destructive systems, "will probably complete development in the next several years," Coats added. "Russian military strategists likely view counterspace weapons as an integral part of broader aerospace defense rearmament and are very likely pursuing a diverse suite of capabilities to affect satellites in all orbital regimes."

China and Russia are advancing directed-energy (laser) weapons technologies for the purpose of fielding ASAT systems "that could blind or damage sensitive space-based optical sensors," Coats said. "Russia is developing an airborne laser weapon for use against U.S. satellites. Russia and China continue to conduct sophisticated on-orbit satellite activities, such as rendezvous and proximity operations, at least some of which are likely intended to test dual-use technologies with inherent counterspace functionality."

Coats also testified that robotics technology designed for satellite servicing and space-junk removal might be used to damage satellites.

"Such missions will pose a particular challenge in the future, complicating the U.S. ability to characterize the space environment, decipher intent of space activity, and provide advance threat warning," Coats wrote.

Additionally, the global threat of electronic warfare attacks against space systems will expand in the coming years in both the number and types of weapons, Coats noted.