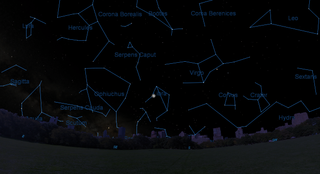 The Full Flower Moon will be visible in the constellation Libra on May 10. Here, it is seen from New York City at 11:52 p.m. local time.
(Image: © Starry Night software)

With the nights getting warmer, skywatchers will have a fine show tonight (May 10) from the May full moon, known as the Full Flower or Milk Moon.

The moon will appear in the constellation Libra, rising at 7:49 p.m. on May 10 for observers in New York City. The moon's exact moment of fullness will occur at 5:42 p.m. EDT (2142 GMT) as calculated by timeanddate.com, so most East Coast residents won't be able to see that exact moment — but the moon will still appear full in the sky over the course of the night. In New York City, the moon sets at 6:28 a.m. the morning of May 11. (These times will vary a bit as one moves farther south or north).

May's full moon won't pass any planets the way April's did, but it will traverse a relatively dim patch of sky, which means the satellite will stand out that much more. The moon will be framed by Scorpio's "claws" on the western side (to the left from the Northern Hemisphere) and the star Zubeneschamali, or Beta Librae, to the northeast (roughly above and to the right). Even from a dark-sky location, the full moon will wash out the nearby dimmer stars of constellations such as Ophiuchus and Lupus.

Fans of occultations — when one celestial object covers another — will be happy to see one with this full moon. For North American observers, the moon passes in front of the 3.9-magnitude star Gamma Librae, or Zuben-el-Akrab, at 11:20 p.m. Arizona time (2:20 a.m. EDT or 0620 GMT on May 11), according to the Gilbert Rotary Centennial Observatory in Gilbert, Arizona. The occultation will be visible from the U.S., almost all of Mexico and southern Canada. (Remember, Arizona doesn't observe daylight saving time).

According to documents by the Ontario Native Literacy Coalition, the Ojibwe peoples called the May full moon a Full Flower Moon (Waawaaskone Giizis), while the Cree named it the Frog Moon (Athikipisim) because this was the time of year frogs became active. (The Cree peoples lived in an area stretching across what is now Quebec, Labrador, the western provinces of Canada to the Rockies, and the northern parts of the U.S. States of Montana and Minnesota; other Algonquin-speakers lived in what is now northeastern North America)

In China, May's full moon will be known as Huayue, during the Locust Tree month. Islamic countries might note that the moon occurs during the month of Shaban, which precedes Ramadan.

For Northern Hemisphere observers, the full moon will be in the sky for less time than the sun is. Being opposite from the sun in the sky, the moon is in the part of the ecliptic that is below the celestial equator. It therefore traverses a shorter path from horizon to horizon. In New York City, for example, the moon will be in the sky for a total of 10 hours and 40 minutes. The sun, meanwhile, is up for about 14 hours and 17 minutes.

The farther north an observer is, the more pronounced the effect is. From Reykjavik, Iceland, for example, the length of day on May 10 is 17 hours and 52 minutes, while the moon will get no more than 15 degrees above the horizon at night.

The effect is reversed for Southern Hemisphere viewers. Australians are readying for winter, with the sun low in the sky and the full moon high up for easy viewing.

The full moon's proximity to the horizon in the Northern Hemisphere makes for some good "moon shot" photography, since it's easier to get objects like buildings or the landscape in the shot. Doing so makes the moon look bigger, because the ground objects give it scale.

Editor's Note: If you capture an amazing photo of the Full Flower Moon and want to share it with Space.com for a story or gallery, please send images and comments to managing editor Tariq Malik at spacephotos@space.com.