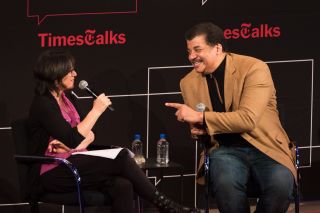 The astrophysicist discussed his new book and much more with journalist Amy Harmon May 5 in a live interview for the New York Times' TimesTalks program.

In writing the book, Tyson said he tried to explain the science seen in the headlines — the Big Bang, black holes, the search for life, quantum mechanics and more — in short, succinct chapters that can be read on the go. [Neil deGrasse Tyson's Words Inspire Cosmic Song and Music Video]

"I thought to myself — something needs to be out there that could put a coherent umbrella over all those bits and pieces that you hear — words like exoplanet, dark matter, dark energy, multiverse, colliding black holes," Tyson said during the talk, which is available in full on YouTube. "You've heard these terms, and you've read these fragments of the story."

He discussed the way that he conveys science — by attaching scientific concepts to a pop culture scaffold of references and ideas that people already understand. But if a concept is "fundamentally mind-blowing" without a pop culture connection then he just puts it out there, he said — and a combination of those types of concepts makes up the book.

Tyson also talked about how he prepares to present science to the public: by practicing quick, couple-sentences statements about any science topic, for instance, and by keeping up with the most current pop-culture touchstones.

He described when he was first preparing to go on "The Daily Show with Jon Stewart": "My first interview on Jon Stewart, I studied how many seconds he let his guests speak before he interrupted," Tyson said. "I got the rhythm of that, and I said if I ever go on the show, I will parcel my cosmic knowledge in these bits so that I will complete a thought before he interrupts … and then we can laugh at whatever joke he makes."

Similarly, Tyson set out to pace his book in a way that would keep the attention of people who are interested and willing to reach out for more information, but who don't have a lot of time to devote to science, he said.

"I need an offering for the people who are curious, who retain some fragments of information but are desperate to consummate their relationship with the universe," Tyson said. "And this is a conduit for that effort. I try to blow your mind with some cosmic phenomenon every 20 pages or so."

You can watch the full talk — in which Tyson discussed his views on the world's increasing science literacy, what to do about people who deny scientific evidence, the anatomy of a sound bite and lessons learned from his first TV interview, among many other topics — in the window below.