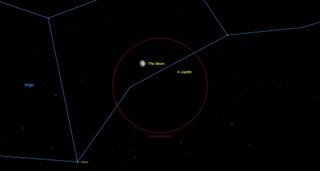 On Sunday, May 7, Jupiter, the nearly full moon, and the bright star Spica will appear together in the eastern sky starting about 6:30 pm local time. The moon and Jupiter will fit within a binocular field of view and make a nice photo opportunity. The three objects will cross the night sky together and be visible low in the western sky before 5 am local time.
(Image: © Starry Night)

If your sky is clear early on this evening (May 7), be sure to check out the south-southeast sky a couple of hours after sundown. There, located halfway from the horizon to the point directly overhead (the zenith) you'll find an eye-catching sight, weather permitting.

You'll immediately see the moon, which will be 93-percent illuminated in its waxing gibbous phase, on its way to becoming full on Wednesday (May 10). But on this particular Sunday evening, you'll also notice a very bright, silvery "star" shining with a steady glow to the moon's immediate right. That’s not a star, however, it's the biggest planet in our solar system: Jupiter. Both moon and planet will keep each other company as they slowly glide across the night sky through the course of the night.

Casual observers looking skyward will almost certainly wonder what that bright object near the moon happens to be, and I would encourage all my fellow broadcast meteorologists to let their listeners and viewers in on what they're looking at tonight. [The Brightest Planets in May's Night Sky]

Jupiter is ideally placed for evening viewing, shining high and free where trees and other obstructions reach in vain to hide it, and where even the ill-effects of atmospheric seeing are at their least.  Jupiter is currently shining in Virgo. It reaches its highest point in the sky — transiting the meridian as the astronomers would say — just before 11 p.m. your local time. It sets during the predawn hours, around 4:30 a.m.

And if you look well below and slightly to the left of the moon-Jupiter duo, you'll see a bluish star, Spica, the 16thbrightest star in the sky and yet shining only about 1/23rd as bright as Jupiter.

For amateur astronomers, Jupiter is the best of the planets; a superb telescopic object.  Its disk shows more illuminated surface area than all the other planets combined.  Users of the very smallest telescopes or even steadily held binoculars can identify some of or all four of its bright moons at any given time.

But the planet’s disk itself also draws a lot of attention. In large telescopes one can view its cloud belts; sometimes one or more can look strongly disturbed, full of knots and sprouting festoons or on the other side of the coin, perhaps looking like pale belts crossing the planet. Observing from Cebu, Philippines, Christopher Go, an assiduous watcher of Jupiter, images the planet on every clear night and posts them on his web page, along with comments at: http://astro.christone.net/jupiter/.

As always, seeing much detail on Jupiter requires a good quality telescope, good atmospheric seeing, and patience behind the eyepiece.

Lastly, if clouds hide your view of the moon and Jupiter on Sunday, don't fret. They'll be together again on June 3.

Editor's note: If you snap a great photo of the moon and Jupiter, and would like to share it with Space.com for a story or photo gallery, send in images and comments to: spacephotos@space.com.

Joe Rao serves as an instructor and guest lecturer at New York's Hayden Planetarium. He writes about astronomy for Natural History magazine, the Farmer's Almanac and other publications, and he is also an on-camera meteorologist for Verizon Fios1 News in Rye Brook, N.Y. Follow us @Spacedotcom, Facebook and Google+. Original article on Space.com.