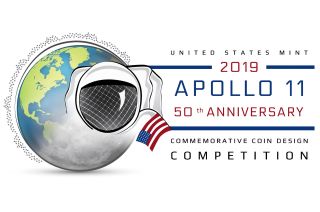 What should be depicted on the front of the United States coins that will commemorate 50 years since the first moon landing?

To answer that question, the United States Mint launched a public design competition on Monday (May 1). Interested artists have until June 29 to submit their portfolio to vie for a chance to propose a design for the coins.

As called for by Congress, the Mint will issue curved gold, silver and clad metal coins, all bearing a common design, "to recognize the 50th anniversary of the Apollo 11 mission and to honor the United States space program leading up to the first manned moon landing." Proceeds from the sale of the coins will benefit the Smithsonian's National Air and Space Museum, the Astronauts Memorial Foundation and Astronaut Scholarship Foundation. [Apollo 11's Scariest Moments: Perils of the 1st Manned Moon Landing]

collectSPACE (cS): Why a design competition over an in-house designer? The provision for the contest was written into the bill that authorized the commemorative coins. Was that something suggested by the Mint to Congress?

April Stafford (AS): The Mint does not suggest or request that provisions be added to a bill. The U.S. Mint is required to administer all programs according to legislation enacted by Congress and signed into law by the President.

Accordingly, the sponsor of the Apollo 11 50th Anniversary Commemorative Coin Act added the competition provision, which lawfully requires that the Mint execute the program as so.

cS: How does this design competition differ, if at all, from past competitions held by the Mint?

AS: The structure of the competition is similar to those the Mint has recently held.

During Phase One, which is open to the public from May 1 through June 29, artists will submit three to five samples from their existing portfolio, along with contact information. This can be uploaded to the Mint's website. The portfolios will be evaluated by an expert jury. From there, the jury will choose no more than 20 artists to take part in Phase Two.

What is different with this competition is that during Phase Two, finalists only need to submit a two-dimensional digital design. Recent competitions have required or suggested a three-dimensional model be part of the entry.

For this competition, a three-dimensional model will not be accepted due to the complexity of sculpting on a curved basin. Also of note, those invited to take part in Phase Two will be paid a stipend of $500.

cS: On average, how many entries have been received in prior two-phase competitions?

AS: The Mint does not disclose the number of responses for past competitions. But we have been very pleased with both the quantity and quality of the entries.

cS: Why must artists be 18 years of age or older?

AS: It is the Mint's policy that artists must be 18 years of age or older due to legal and contract requirements.

cS: What type of art samples works best for the first phase of the competition? Should it be space related?

AS: While the Mint wants to encourage as many artists as we can to participate in this competition, they do need to demonstrate certain aspects of their expertise. Things that come into play are…

cS: What is special about the four coins in the Apollo 11 50th anniversary commemorative program?

AS: All four Apollo 11 coins are curved, which, given the subject matter, will make for very engaging artistic designs. Also special is that this is the first time in recent years that a U.S. Mint commemorative coin program has more than three coins.

Finally, the fourth coin in this program is a 5-ounce version. The U.S. Mint has never produced and offered a curved 5-ounce coin in its history, so that will add to the excitement as well.

Continue reading the interview with the U.S. Mint's April Stafford to learn what makes for a good Apollo 11 50th anniversary design and what will appear on the reverse of the coins.