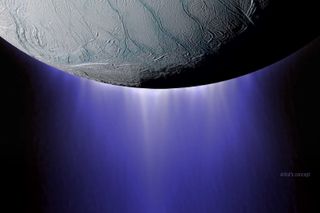 Researchers are studying whether amino acids could act as building blocks for life in alien environments, such as on Saturn's moon Enceladus.
(Image: © NASA)

Astrobiologists are looking at amino acids and trying to figure out if these building blocks of life can be replicated on other planets.

A team in Indiana is about to look at amino acids that have been extracted from meteorites, as well as those that were created in origin-of-life experiments that happened as long ago as the 1950s. The goal is to better identify what characteristics would make extraterrestrial life possible. The challenge, however, is the proteins an organism uses on Earth wouldn't necessarily be used in more exotic locations.

"Our main goal with this research is to see if there are structural characteristics of some amino acids that lead to a higher stability in extraterrestrial conditions, and then to see what those characteristics might be," said Claire Mammoser, an undergraduate research assistant at Valparaiso University in Indiana who is working on the project.

"Finding trends in amino acid stability would give us an idea of what sort of amino acids may have survived in outer space long enough to create life," Mammoser added.

Her team has already analyzed 15 amino acids, some of which are found in life on Earth, and some that are not associated with life at all. They subject vials of the amino acids to extreme temperatures, radiation, acidity, and other items that simulate other environments in the solar system. Examples include Mars, which has a thin atmosphere and moderately high radiation, or Enceladus, a moon of Saturn that has no atmosphere and is famous for sprouting water geysers.

RELATED: How Would NASA Search for Extraterrestrial Life on Enceladus?

The team then determines how well the amino acid stays together or to what extent it breaks down. Over time, they are looking to find patterns for the stability of amino acids with several characteristics, such as the ability to bind with water — an essential function of life.

"This work is exciting for us because there is not a lot of previous work in this area," said Mammoser.

"Often," she added, "we are privileged to work on extensions of existing areas of research which have been pioneered by great minds in the field, but this project has been different in that we have done a lot of the initial development ourselves. This is both a challenge and extremely exciting, because there is a sense that we are not just gathering data, but we are also making decisions about the best way to measure amino acid stability in our lab every day."

Mammoser will present her results at the American Society for Biochemistry and Molecular Biology annual meeting, which is being held this week in Chicago.