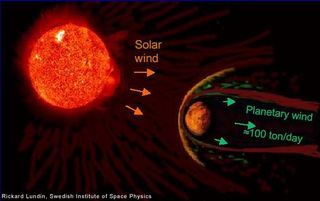 Diagram shows the solar wind creating a teardrop-shaped planetary tail behind Mars. Water and other volatile substances are lost to space in the process.

Like a comet, Mars has a tail, a stream of particles pushed away from the planet by the Sun's energy.

New measurements of the Martian tail reveal how much air the planet loses to space every day and allow scientists to estimate the tremendous loss that may have occurred billions of years ago, making the red planet the dry and cold world it is.

Theory holds that Mars once had a thick atmosphere, but today it is about 1 percent as dense as the air on Earth. Nobody is sure exactly where it all went, but a planetary tail, kicked up by a solar wind, is one likely culprit.

Unlike Earth, Mars is not protected by a strong magnetic field. So charged particles riding out on the solar wind -- a constant stream from the Sun -- are able to interact directly with Mars' atmosphere, energizing particles there until they reach the escape velocity of the planet.

"The atmosphere of an unmagnetized planet like the present Mars is effectively dehydrated by the solar wind," explained study leader Rickard Lundin of the Swedish Institute of Space Physics. "The solar wind carries energy and momentum directly into the ionosphere and upper atmosphere of Mars."

The escaping particles that were observed are called ions, Lundin explained. They are oxygen, hydrogen and molecules such as carbon dioxide that have lost an electron and become positively charged.

About 1 kilogram of mass is lost to space every second, Lundin told SPACE.com. That would be equal to 2.2 pounds of material if weighed on Earth.

Though the tail of Mars is not visible to the eye, the process is much like what the Sun does to volatile substances on the surface of a comet. "The tail of a comet illustrates this very well," Lundin said.

How all this affected ancient Mars is what scientists would really like to know.

Mars probably had a magnetic field 3.5 billion years ago, Lundin said, but it didn't stick. Thereafter, while the atmosphere was still presumably dense -- perhaps 10 times thicker than today -- the loss rate for water and other substances would have been perhaps 100 times higher than it is now, Lundin said.

The measurements were made by the European Space Agency's Mars Express orbiter. The results are detailed in the Sept. 24 issue of the journal Science.