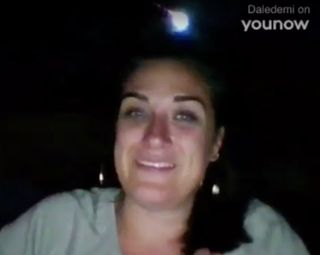 The meteor was spotted at about 9:00 p.m. PDT (10:00 p.m. MDT; midnight EDT and 0400 GMT on Tuesday, April 11). Videos of the event show a bright green streak that flares up three or four separate times before fading into the darkness.

One of these videos is a live stream recorded by Faye Heddings in East Lake, near San Diego. The meteor flashes overhead behind her, in a memorable fireball photobomb.

"The preliminary estimated trajectory plotted from the witness reports shows the meteor was traveling from the east to west and ended its visible flight on the Pacific Ocean somewhere over the San Diego Trough," wrote representatives with the American Meteor Society (AMS), which had received more than 400 reports of the "San Diego Fireball" as of Tuesday afternoon.

Just seven people have reported hearing a noise associated with the meteor so far, AMS representatives added. (Such meteor sounds have long puzzled scientists. But a recent study suggests that they're likely caused by bright pulses of fireball light, which heat up hair, fabric and other material near observers' ears, generating pressure waves that manifest as sound.)

About 100 tons of space material falls into Earth's atmosphere every day. Most of this stuff is dust, and it burns up without leaving a noticeable trace. But some incoming space rocks are big enough to make a visible trail — and some of these blaze up brighter than Venus, meeting the technical definition of "fireball."

Such events aren't terribly uncommon. A spectacular fireball wowed observers in the Milwaukee area in February, for example, and a handful of other such events made news in 2016. And sometimes humanity sets the stage for the skywatching show: One of last year's brightest fireballs was caused by a 6-ton Chinese rocket stage that fell back to Earth on July 27.

Here are some videos of Monday's San Diego Fireball that observers posted on YouTube:

Editor's note: If you capture an amazing image of a fireball or any other night-sky view that you'd like to share, you can send it to managing editor Tariq Malik at spacephotos@space.com.