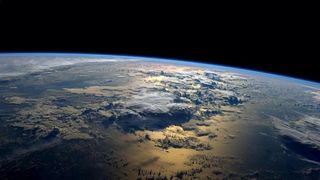 Earth became a planet too, once the 'wanderers' were understood.
(Image: © Reid Wiseman/NASA)

A team of Harvard researchers is preparing a first-of-its-kind field experiment in the hotly-debated area of solar geoengineering, the controversial idea to combat climate change by pumping aerosols into the sky to reflect the sun's rays back into space.

The study will be the first to actually shoot tiny amounts of material into the stratosphere to study solar geoengineering — although researchers caution they will start with water vapor and won't exceed volumes over 1 kilogram of any substance.

Yet the concept of intentionally modifying the earth's atmosphere as a corrective for global warming is highly contentious, even among those who believe it could one day be used responsibly.

"The idea that you could even think about adjusting the temperature of the planet is terrifying," said Frank Keutsch, one of the Harvard scientists leading the study. "But the consequences of climate change are also quite terrifying. This is a very serious subject."

Research is needed to understand the concept better, Keutsch said — including what could go wrong if somebody tries it.

"The big risk with stratospheric geoengineering is unforeseen consequences," Keutsch said. A key goal, he said, "is to better understand some of the risks."

Keutsch and his colleagues plan to send a balloon equipped with sensors and propellers 20 kilometers above Earth from a launch site near Tucson, AZ. There, the balloon will spray water into the stratosphere, creating a plume of floating ice crystals one kilometer long and 100 meters wide.

The balloon, attached to a gondola system and controlled by engineers on the ground, will then move through the artificial ice cloud slowly, taking measurements.

"Of course, we understand that solar geoengineering is not the solution — it can't be. We have to reduce emissions. We have to mitigate. That is step one."

The first stage of the test could occur as soon as next year, using only water and aiming to test the methodology and technology of the experiment itself. As the study progresses, new substances may be introduced and examined — including calcium carbonate, sulfates, or even diamond dust.

While the concept of geoengineering may be risky, the actual study proposed is not, Keutsch maintained. His team's investigations will disturb the atmosphere far less than a jetliner.

Yet even holding a public debate about finding a technological solution for climate change may be problematic, said Gernot Wagner, head of Harvard's Solar Geoengineering Research Program.

The idea of exploring a relatively simple technological solution to the problem could potentially end up deterring world leaders from making necessary reductions in carbon dioxide (CO2) emissions, he said.

"Of course, we understand that solar geoengineering is not the solution — it can't be," he said. "We have to reduce emissions. We have to mitigate. That is step one."

Solar geoengineering "is both terrifying and nuts, in isolation," Wagner said. "But the question is — nuts compared to what? Is it nuts to be staring down the climate abyss, the way we are doing right now?"

Even if solar geoengineering worked perfectly, it wouldn't solve all the problems associated with CO2 emissions, such as the acidification of the ocean caused by carbon build-up, Keutsch said.

Rather, he said, geoengineering should be seen as similar to a painkiller for a gravely ill patient — with similar benefits and associated risks.

Like a painkiller, geoengineering "won't solve the underlying problem," he said. "It can even encourage bad behavior, like when people do things they shouldn't because they don't notice the pain."

Still, he said, studying the issue will help the world make educated decisions about possible risks and benefits of different strategies to deal with climate change.

"My view is we should always choose knowledge over ignorance," Keutsch said.