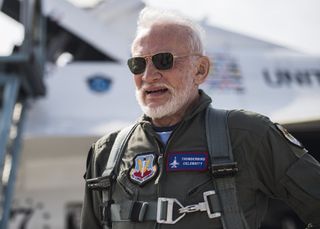 Buzz Aldrin, who became the second man to walk on the moon in 1969, once again made history last weekend. The world-famous octogenarian flew with the Thunderbirds at the Melbourne Air & Space Show in Melbourne, Florida, on Sunday (April 2).

Aldrin, 87, was able to take part in the demonstration despite the difficult physical requirements for pilots, a press statement noted. Watch the video here.

"It's always a thrill to get back in the cockpit of an Air Force jet," Aldrin said in an e-mailed statement to Space.com. "Especially with a bunch of highly talented jet jockeys like the Thunderbirds." [In Pictures: Buzz Aldrin Soars with the USAF Thunderbirds]

"Call me ThunderBuzz!" Aldrin said on Twitter following his flight. "I don't think the @AFThunderbirds are going to let me keep the F-16 with my name on it, though."The Thunderbirds is an air show demonstration squadron that's assigned to the 57th Wing, at Nellis Air Force Base in Nevada. The team has been flying since 1953, making it one of the oldest flying aerobatic teams in the world. The team members perform in the United States and around the world.

Aldrin, a retired colonel, joined West Point in 1947 and was an aide to the dean of faculty when the U.S. Air Force Academy began. Aldrin chose to become a fighter pilot after he received his commission, and he flew over 66 combat missions in the Korean War.

Prior to joining NASA in 1963, Aldrin did a tour of duty in Germany and went on to earn a doctorate of science in astronautics at the Massachusetts Institute of Technology. Aldrin was in the third group of NASA trainees when he was selected to become an astronaut. He flew on Gemini 12, where he demonstrated new techniques for spacewalks. Aldrin completed his second, and final, spaceflight as a member of the Apollo 11 team.

Aldrin remains an advocate for human spaceflight, especially regarding future human settlements on Mars. He has authored several books about his spaceflight exploits, lent his name to a couple of computer games, and, most recently, moved into virtual reality.