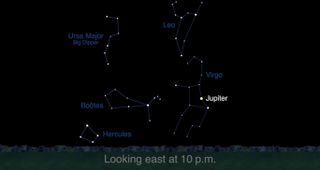 Jupiter reaches opposition, when it is directly opposite the sun when viewed from Earth, on April 7, 2017 and will shine at its brightest. This NASA sky map shows where to see Jupiter in the eastern night sky at 10 p.m. your local time.
(Image: © NASA/JPL-Caltech)

In the current evening sky, you might say that the queen has abdicated and the king has taken her place.

Until a couple of weeks ago, Venus was the predominant evening object, blazing brilliantly in the western sky; skywatchers could have christened her the "Queen of the Evening." But on March 25, Venus passed between the Earth and the sun and transitioned into the morning sky. To see her now, you'll have to arise about an hour before sunrise and look low on the eastern horizon.

So now skywatchers are without the lustrous Venus, but to take her place, they need only look toward the east soon after sundown, where the "King of the Planets," Jupiter, now calls for attention. [Jupiter at Opposition Tonight: Where to Look | Video]

Brighter than the brightest star

This giant world, which harbors nearly three times as much mass as all the other planets put together, attains opposition tonight (April 7), forming a straight line with Earth and the sun. Opposition also marks the point in a planet's orbit when it's closest to Earth; indeed, Jupiter is currently just 415 million miles (670 million kilometers) from Earth.

Interestingly, for the first time in a dozen years, opposition comes when Jupiter is just past aphelion (the farthest point from the sun during planet's orbit, where Jupiter was on Feb. 16). This is therefore one of the most distant oppositions possible for Jupiter, but that doesn't make a huge difference to skywatchers. The planet appears just 12 percent smaller now than it does during its closest oppositions.

And right now, the big planet is shining at an impressive magnitude of minus 2.5. That's nearly three times brighter than Sirius, the brightest star in the sky; compare the two at around 9 p.m. local daylight time this week, when they'll appear at about the same altitude above the horizon, Jupiter about 20 degrees high in the east-southeast and Sirius at a similar height in the southwest. (Reminder: Your clenched fist held at arm's length is equal to roughly 10 degrees.)

Take note that Jupiter glows with a steady, silvery-white light, whereas blue-white Sirius seems to scintillate.

So much to see

Jupiter currently rises in the east at sunset; reaches its highest point in the sky, due south, at around 1 a.m. local daylight time; and drops down beneath the western horizon as the sun is about to emerge back into view in the east.

Right now is the very best time to look at Jupiter, as the gas giant is now readily available for telescopic scrutiny through the entire night. Like Venus before it, Jupiter will now dominate the night sky, from tonight right on through the end of September.

Any good astronomical telescope should be able to show at least a few of Jupiter's darkish belts and lightish bands, along with further details in the planet's atmosphere — on a good, steady night when the planet is high in the sky. [Photos: Jupiter, the Solar System's Largest Planet]

A small telescope, and even steadily held binoculars, will also show Jupiter's four "Galilean" moons, which were among the first discoveries Galileo made using his crude telescope in 1610.

It's always interesting to watch these four satellites, two of which are larger than Earth's own moon, from hour to hour and from night to night. They look like bright stars. As they circle around Jupiter in paths turned nearly edgewise to the Earth, they appear to swing back and forth, keeping always nearly in line.

Often, one of these moons is lost to view for a time while it passes behind the disk of the planet (an occultation) or is in eclipse while passing through Jupiter's dark shadow. Frequently, too, skywatchers can watch one of these moons pass across the bright disk of Jupiter (in transit), while the shadow it casts on the planet's face trails behind or goes on ahead of the satellite itself.

Try to study the Galilean moons' tiny disks with a moderately high-power telescope on a very steady night; even a 6-inch telescope can resolve them into more than just fat "stars." And with Jupiter cruising across the sky all night, there are bound to be plenty of transits and occultations of the Galilean satellites visible while the planet is high.

Teaming up with Spica and the moon

Currently, Jupiter is positioned against the backdrop of the relatively dim stars in the constellation Virgo; the gas giant is not far, in fact, from Virgo's brightest star, the bluish, 1st-magnitude Spica (which supposedly marks the spike of wheat that Virgo holds in her hand).

Spica can be found about 8 degrees below Jupiter. Although Spica is the 16th brightest star in the sky, it's just 4 percent as bright as "Big Jupe."

Lastly, on Monday evening (April 10), Earth's moon — just hours from turning full and itself opposite to the sun's place in the sky — will be positioned only a couple of degrees to the lower left of Jupiter as the two objects rise in the east-southeast when darkness falls.

Editor's Note: If you capture an amazing photo of Jupiter or any other night-sky sight and want to share it with Space.com for a story or gallery, please send images and comments to spacephotos@space.com.