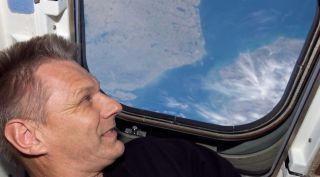 Piers Sellers, climate scientist and NASA astronaut, looks out the window of Space Shuttle Discovery during a 2006 mission. He was honored posthumously at the 33rd Space Symposium Wednesday.
(Image: © NASA)

COLORADO SPRINGS — During the Space Foundation's luncheon honoring Piers Sellers , speakers lauded the former astronaut for his tireless work to draw attention to Earth's changing climate and to seek technological solutions to limit mankind's impact on the planet.

Sellers was a passionate advocate for climate change research. During a video tribute, Sellers explained, "The facts are crystal. The ice is melting. The Earth is warming. The sea level is rising. Those are facts. Rather than feel, 'Oh my God it's hopeless,' say, 'Okay. This is the problem. Let's be realistic. Let's find a way out of it.' And there are ways out of it."

When Sellers looked at Earth from the space shuttle, he could see the thin film of gas surrounding the planet. "That really showed me how easily mankind can affect its own environment," Sellers said in the video. "The stuff we breathe there is not much of it. It's a very thin atmosphere. We've got to protect it."

Colleen Hartman, director of the NASA Goddard Space Flight Center's Sciences and Exploration Directorate, said Sellers did not adopted a "doom and gloom" view of climate change. "He believed technology, human innovation would save this precious planet," Hartman said during the luncheon.

The best way to honor Sellers would be for everyone "to get involved in taking care of Space Station Earth," said Garrett Reisman, former NASA astronaut and SpaceX director of space operations.

"I have to say it, in the current geopolitical landscape, it is important to remind [everyone] that we in Europe accept the evidence confirming the existence and impact of the climate change, and we are actively acting on it," Bienkowska said during her speech Wednesday at the symposium.