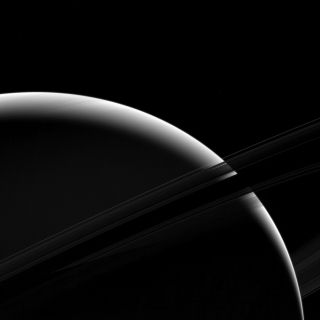 NASA's Cassini spacecraft circled around to Saturn's dark half while passing through the plane of the gas giant's iconic ring system and captured this mystifying view of the rings' shadowy underside.

This view from 7 degrees below Saturn's ring plane shows a sliver of the planet's sunlit side peeking out over the horizon as some sunlight gleams through a shadowy silhouette of Saturn's rings. Made of icy rocks and particles, the rings vary in structure, so some appear more transparent than others. While light can shine through the dusty, diffuse rings, hardly any light can wrestle through the denser, main rings. [Photos: Saturn's Glorious Rings Up Close]

"From this vantage point just beneath the ring plane, the dense B ring becomes dark and essentially opaque, letting almost no light pass through. But some light reflected by the planet passes through the less dense A ring, which appears above the B ring in this photo," NASA officials said in a statement.

"The C ring, silhouetted just below the B ring, lets almost all of Saturn's reflected light pass right through it, as if it were barely there at all," NASA added. "The F ring appears as a bright arc in this image, which is visible against both the backdrop of Saturn and the dark sky."

Cassini captured the photo on Jan. 18, and NASA released it on April 3. At the time the image was taken, Cassini was approximately 630,000 miles (1 million kilometers) from Saturn in its 257th orbit. To capture Saturn's details in the dark, Cassini's wide-angle camera took the photo in green light.

Now in its 13th and final year orbiting Saturn, Cassini is in a phase of its mission called "Ring-Grazing Orbits," diving through the planet's ring system about once every week and getting closer to the rings than ever before. The mission's "grand finale" this year will see the spacecraft orbit increasingly nearer to Saturn before ultimately plunging into the planet's atmosphere.