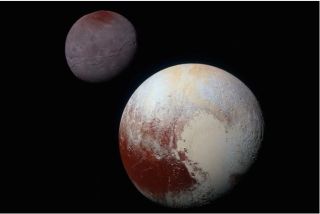 Composite of enhanced color images of Pluto (lower right) and Charon (upper left), as viewed by NASA’s New Horizons spacecraft as it passed through the Pluto system on July 14, 2015.
(Image: © NASA/JHUAPL/SwRI)

THE WOODLANDS, Texas—More than a decade after the International Astronomical Union (IAU) voted to officially reclassify Pluto as a "dwarf planet," scientists and the public are still hotly debating the decision. Some staunch supporters of Pluto's full-fledged planethood are renewing calls for the IAU to reverse Pluto’s demotion. Their opponents insist the decision should stand.

Others—perhaps a silent majority—watch with ambivalence (if not outright distaste) as their more-passionate peers loudly and publicly squabble over nomenclature. All three camps could be found here last week at the 48th Lunar and Planetary Science Conference (LPSC), one of the globe's most prestigious gatherings of space scientists.

Regardless of what one calls it, there is no question our first-ever close-up look at Pluto — via a flyby by NASA's New Horizons spacecraft in 2015 — has rekindled the debate about the famous object's standing in our solar system. With its five moons, icy mountain ranges, glacial seasons and cryogenic atmosphere, Pluto's frigid beauty and complexity rival those of any other world orbiting the sun. Whether those surprising, eye-opening details will lead to Pluto reclaiming its planethood, however, remains to be seen.

Should a Hundred Planets Bloom?

It was not for lack of beauty that Pluto was demoted, but rather its failure to match the IAU's revised definition of what constitutes a planet. According to the organization's 2006 decision, planets must: orbit the sun; be big enough for its self-gravity to pull it into a spheroidal shape; and sweep most bulky debris out of their orbits. Pluto meets the first two criteria — enough to qualify as a dwarf planet — but controversially fails the third, as its orbital neighborhood is thick with other large, icy objects. Were this third criterion to be relaxed, many of those objects would qualify for planethood, too, greatly swelling the planetary ranks of the solar system.

Among the hundreds of posters pinned up science-fair fashion in the LPSC's conference rooms and exhibit area, one challenged the IAU's conceptions of planethood with a new definition based more on geophysics than orbital mechanics. Its lead author is Kirby Runyon, a PhD candidate in planetary geology at Johns Hopkins University and an affiliate on the geology team for the New Horizons mission.

Runyon's take is that a "planet" is any substellar-mass body that has sufficient self-gravitation to assume a spheroidal shape, regardless of its orbit. His poster's abstract at LPSC states, in part: "Astronomers with research interests in dynamics may find the IAU definition perfectly useful. However, many planetary scientists are closely aligned with the geosciences. Accordingly, our geophysical definition is more useful for planetary geoscience practitioners, educators and students." That definition could also boost the scientific literacy of the general public, according to Runyon.

In addition to Pluto, Runyon’s definition would bestow planethood on other recognized dwarf planets such as the giant asteroid Ceres as well as "moon planets" including Pluto's moon Charon, the largest moons of Jupiter and Saturn, and even Earth's moon. Thus, this new definition would add at least 110 known planets to our solar system. This number will rise, Runyon added, as astronomers find more objects in the Kuiper Belt — a disc-shaped region of space that stretches out beyond the orbit of Neptune and harbors Pluto as well as hundreds of thousands of other icy worlds.

Runyon's redefinition at LPSC received decidedly mixed reviews. "My view is simple," says James Green, Director of the Planetary Science Division at NASA Headquarters. "NASA doesn't care about the nomenclature. All I can say after seeing Pluto with the New Horizons flyby is that it is even more fascinating than I could have imagined!"

New Horizons zipping by Pluto and relaying astonishing up-close imagery is a prelude of what's ahead, says Carle Pieters, a professor of planetary science at Brown University. The spacecraft is slated to encounter a second, much smaller Kuiper belt object in 2019. And back on Earth astronomers are busy adding new objects to their catalogues all the time. As these efforts lift the veil on a largely unexplored region of our solar system, Pieters says, new discoveries could force the reappraisal of old, outmoded definitions.

Already, Pieters says, revelations from closer to home are adding more fuel to the fiery debate over the IAU's definition. NASA's Dawn spacecraft, she notes, is delivering images from Ceres — a spheroidal, Texas-size hunk of rock and ice that is the largest object in the Asteroid Belt between Mars and Jupiter. "It's another dwarf planet, a planetary body that's going through planetary processes. And Pluto has done the same thing," she says. So if you have a body that's big enough to undergo planetary processes such as the formation of a molten core, persistent volcanism or even the creation of a substantial atmosphere, what do you label it? "Calling these smaller planetary bodies 'dwarf planets' is sort of a good compromise," Pieters says.

Ask Andrew Cheng about Pluto's diminished stature and you'll get a different perspective. Cheng is chief scientist for the Space Department at Johns Hopkins University Applied Physics Laboratory, and is unabashedly livid at Pluto's demotion. "I think it was a wrong decision in the first place to ask a scientific community to craft a scientific definition that would carefully include eight bodies and leave out Pluto," Cheng says. "My position is that the definition of a planet is not a scientific question to begin with … it should have never been done."

Whether or not an object is considered a planet is a matter of social conventions, not of science, Cheng says. He rates asking if Pluto is a planet as analogous to questioning what constitutes a continent on Earth. "There are seven continents … Australia is in, but Greenland is not. Is there good scientific reason for that? No, it's just the convention. The planet situation is entirely similar," he says.

Cheng was until last year the principal investigator for the Long Range Reconnaissance Imager (LORRI) camera onboard NASA's New Horizons spacecraft. If the IAU had known as much about Pluto back in 2006 as we do now, he contended, the debate over that world's planethood would probably never have occurred. "There are many scientists who just refuse to accept that Pluto is not considered a planet," similar to the way many geographers would refuse to accept reclassifying Australia as no longer a continent, Cheng says. "So we will call it a planet, and we always will."

Shedding a Tear for Pluto

For Runyon, the planetary geologist pushing for a reconsideration of Pluto, his new meaning of "planet" doesn't need the IAU's blessing as an "official" definition. Moreover, he insists that because its purview is astronomy and not geology, the IAU does not actually have the authority to dictate geologic definitions and usage. (The IAU does not necessarily agree. In February it announced that as the internationally recognized authority for naming celestial bodies and their geologic surface features, it had approved themes submitted by NASA's New Horizons team for naming distinctive sites on Pluto and its moons.) "I don't want to fall into the trap of science by authority. I don't think the IAU is trying to do that, but that's how it comes across — "the IAU hath spoken, thus shall it be!" That's a horrible way for the public to try to understand science," he says.

Runyon's attempt to reopen the planetary case for Pluto underscores his belief there's a "psychological power" behind the word "planet" itself. Scientists should be concerned, he says, that Pluto's loss of planethood — seemingly by force — is something that "makes people cry."

Follow Scientific American on Twitter @SciAm and @SciamBlogs. Visit ScientificAmerican.com for the latest in science, health and technology news.