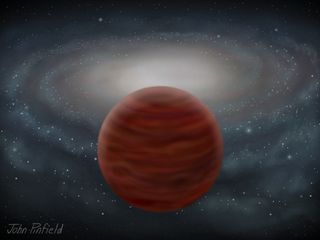 Artist's illustration of the newfound brown dwarf SDSS J0104+1535, which is 90 times more massive than Jupiter. The object is the most massive and purest "failed star" known, researchers said.
(Image: © John Pinfield)

An ancient brown dwarf is the most massive and purest such "failed star" ever discovered, a new study suggests.

Researchers studied an object called SDSS J0104+1535, which lies about 750 light-years from Earth in the Milky Way's "halo," a population of extremely old stars above the galaxy's familiar spiral disk.

SDSS J0104+1535 is a brown dwarf — a bizarre, gaseous body larger than a planet but too small to sustain the nuclear fusion reactions that power stars. New observations by the European Southern Observatory's Very Large Telescope in Chile provide new details about this object, which astronomers think is 10 billion years old. [The Strangest Things in Space]

In addition, just 0.01 percent of SDSS J0104+1535 consists of elements other than hydrogen and helium — meaning that the body is 250 times purer than the sun, and the purest brown dwarf ever observed.

"Pure" in this sense refers to the stuff originally present just after the Big Bang that created the universe 13.82 billion years ago — mostly hydrogen and helium, along with small amounts of lithium. All the naturally occurring elements heavier than these three were created inside stars over the eons.

"We really didn't expect to see brown dwarfs that are this pure," study lead author ZengHua Zhang, of the Institute of Astrophysics in the Canary Islands, said in a statement. "Having found one, though, often suggests a much larger hitherto undiscovered population. I'd be very surprised if there aren't many more similar objects out there waiting to be found."

The new study has been accepted for publication in the journal Monthly Notices of the Royal Astronomical Society. You can read it for free at the online preprint site arXiv.org.