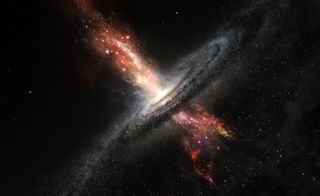 An artist's rendition of stars forming inside jets of material spewed into space by a monster black hole at the center of a galaxy.
(Image: © M. Kornmesser)

Infant stars have been discovered inside raging streams of material spewed into space by a monstrous black hole, according to a new study.

The rather resilient star babies were found in jets of material ejected into space by a monster black hole at the center of a galaxy 600 million light-years away from Earth. As is the case in many other galaxies, the incredible force of the black hole's gravity accelerates the gas and dust around it, before eventually funneling the material into two jets that flow in opposite directions away from the black hole.

Inside one of those cosmic "fire hoses," researchers found a population of stars that is "less than a few tens of millions of years old," and most of which are being swept along in the outflow at a rapid clip, according to a statement from the European Southern Observatory, home to the Very Large Telescope (VLT) that made the observations possible. The jets appear to provide a rich environment for the stars to form in; the scientists found the stars appear to be brighter and hotter than stars that form in "less extreme" areas of the galaxy, according to the statement. [The Strangest Black Holes in the Universe]

The jet where the star formation was detected is coming from the center of one of two galaxies currently merging together, collectively known as IRAS F23128-5919. To detect the baby stars, the research team used the MUSE and X-shooter instruments on the VLT. The researchers initially made an indirect detection of the stars inside the thickly obscured jets. Later, they were able to directly observe the baby stars.

"Astronomers have thought for a while that conditions within these outflows could be right for star formation, but no one has seen it actually happening, as it’s a very difficult observation," Roberto Maiolino, head of the team that made the discovery and a professor of experimental astrophysics at the University of Cambridge, said in the statement. "Our results are exciting because they show unambiguously that stars are being created inside these outflows."

The fate of stars

While the black hole jet apparently provides a fertile star-producing region, it may ultimately subject the stars to a turbulent fate.

"The stars that form further out in the flow experience less deceleration and can even fly off out of the galaxy altogether," Helen Russell, a researcher at the Institute of Astronomy in Cambridge, said in the statement. But Russell said that stars forming closer to the galaxy's center "might slow down and even start heading back inwards."

If cosmic jets are ejecting stars into space across the universe that could help explain how the region between galaxies becomes enriched with "heavy" elements, the statement said. Stars fuse light elements, like hydrogen and helium, into heavier elements, including carbon, nitrogen, oxygen and many others. The explosion of very massive stars can produce even more heavy elements. Once the ejected stars die, they could spew these heavy elements into the intergalactic medium.

Stellar formation inside the flows is considerable — the new study finds that a star about 30 times the mass of the sun is formed in the flow about once per year.

"This accounts for over a quarter of the total star formation in the entire merging galaxy system," according to the statement.

That's a significant-enough contribution that the fate of these stars could help determine the shape of a massive galaxy, the statement said. Elliptical and spiral galaxies have different structures suggesting different formation processes, but both types are surrounded by a halo of stars. Studying stars formed inside black hole jets could help explain how those features form.

"If star formation is really occurring in most galactic outflows, as some theories predict, then this would provide a completely new scenario for our understanding of galaxy evolution," Maiolino said in the statement.

The new study appears today (March 27) in the journal Nature.