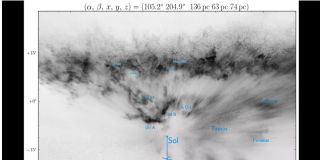 Dust. It's the bane of homeowners and astronomers alike, a persistent nuisance that collects in corners and on shelves — and which can also get in the way and make peering across the galaxy and out into the universe more difficult than it already is.

Dust is especially worrisome for scientists at the Berkeley Lab who are developing a project called the Dark Energy Spectroscopic Instrument (DESI). The ultimate goal of this instrument, slated to begin operating by 2019, is to precisely measure how quickly the universe is expanding. To do so, DESI will build a map of more than 30 million distant galaxies.

"The light from those distant galaxies travels for billions of years before we see it," said Edward Schlafly from the Berkeley Lab, "but in the last thousand years of its journey toward us a few percent of that light is absorbed and scattered by dust in our own galaxy. We need to correct for that."

Schlafly and his team figured out the best way to deal with the dust was to build a 3D map of it — and this turned out to be a lot cooler than it sounds, because once they created the 3D map, they then created a detailed fly-through video of the dust in our galaxy.

The astronomers used observations from several ground-based telescopes to create this 3D map, combining a multiyear survey from the two Pan-STARRS telescopes in Hawaii with observations from a Sloan Digitial Sky Survey telescope in New Mexico called APOGEE, which uses a technique known as infrared spectroscopy.

By mapping the dust in three dimensions, they could find out how much dust is in any region in the sky and in the Milky Way galaxy. Shlafly said the new 3D dust maps are several times better than anything that previously existed.

Not only did they map the dust, they also found a few headscratchers. The properties of the dust are different within 1 kiloparsec (3,262 light-years) of the sun, compared to the dust in the more remote galactic plane and outer galaxy. They also found the distribution of dust to be different than what was predicted in earlier models.

The researchers now have a better idea of the distribution, chemical makeup, size, and shape of the dust grains, which will help to effectively account for the dust and correct for its effects in future observations with DESI.

"Once we can solve the dust problem by creating better dust maps and learning new details about the properties of this space dust, this can give us a much more precise gauge of distances to faraway stars in the Milky Way, like a galactic GPS," the team said in a statement. "Dust maps can also help to better gauge the distance to supernovae events by taking into account the effects of dust in reddening their light."

But there's still more work to do, since the new dust map is incomplete. Another sky survey that will complete the imaging of the southern galactic plane and provide this missing data should wrap up in May.

"There is about one-third of the galaxy that's missing," Schlafly said, "and we're working right now on imaging this 'missing third' of the galaxy."