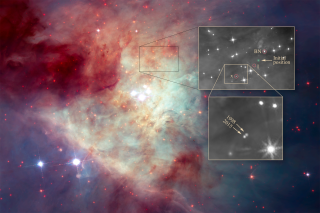 The stars labeled "BN" and "I" in the Orion nebula (near the Trapezium Cluster, visible at center) were discovered flying away from each other over the course of decades. Now, researchers have found a third star, labeled "X," fleeing the same point of origin — you can see how "X" changed over time in the second inset box.
(Image: © Z. Levy (StScI)/NASA/ESA)

Researchers have spotted a long-lost relative of two runaway stars — the three likely parted ways in the Orion nebula as recently as the 1400s (from Earth's perspective).

Two of the young stars were previously discovered speeding away from one another using radio and infrared observations, and observers had traced back to where they could have originated if they'd been from the same system initially. But something didn't quite add up: the two seemed to not have as much combined energy as expected, suggesting that there might be at least one more star that was involved in the system's breakup.

Now, astronomers think they've found the third — another runaway star that came from that same spot in the star-forming region 540 years ago, pinpointed in images from the Hubble Space Telescope. [Orion Nebula Is Stunning In Near-Infrared Light (Video)]

"The new Hubble observations provide very strong evidence that the three stars were ejected from a multiple-star system," the new work's lead researcher, Kevin Luhman of Penn State University, said in a statement. "Astronomers had previously found a few other examples of fast-moving stars that trace back to multiple-star systems, and therefore were likely ejected. But these three stars are the youngest examples of such ejected stars."

"They're probably only a few hundred thousand years old," Luhman added. "In fact, based on infrared images, the stars are still young enough to have disks of material leftover from their formation."

The three stars are all in a region full of young stars called the Kleinmann-Low nebula, which is embedded in the Orion nebula 1,300 light-years away. Each is moving at top speeds of almost 30 times the speed of most of the nebula's stars, researchers said in the statement, and the nebula's thick shroud of dust hides them from most observers (often only radio waves, and sometimes infrared radiation, that the stars produce can make it through the dust).

Luhmann found the star while hunting for free-floating planets on a research team at the Space Telescope Science Institute in Maryland. He was looking at near-infrared data from Hubble's Wide Field Camera 3, and noticed that one glowing spot had changed position in between 1998 and 2015 as compared to nearby stars — suggesting it was moving at about 130,000 mph (210,000 kph), according to the statement.

Working backward, he found that it could have originated in the same spot as the other two runaways. He projected that two members of the multiple-star system approached close enough to merge or form a close binary, unleashing the gravitational energy to fling all the stars outward. (The other two stars are moving away from the origin point at 60,000 mph, or 97,000 kph, and 22,000 mph, or 35,000 kph, respectively.)

According to simulations, such interactions should happen often in crowded clusters of young stars.

"But we haven't observed many examples, especially in very young clusters," Luhman said. "The Orion Nebula could be surrounded by additional fledgling stars that were ejected from it in the past and are now streaming away into space."