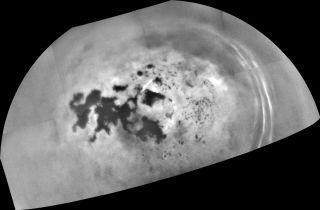 The case of the Saturn moon Titan's bizarre "magic islands" has taken an intriguing turn.

These strangely shifting island-like features, which NASA's Saturn-orbiting Cassini probe has spotted in several of Titan's hydrocarbon seas, may actually be rafts of fizzing nitrogen bubbles, a new study based on laboratory experiments suggests.

"Thanks to this work on nitrogen's solubility, we're now confident that bubbles could indeed form in the seas and, in fact, may be more abundant than we'd expected," study co-author and Cassini radar team co-investigator Jason Hofgartner, of NASA's Jet Propulsion Laboratory (JPL) in Pasadena, California, said in a statement. [Amazing Photos of Saturn's Moon Titan]

The researchers, led by Michael Malaska of JPL, simulated surface conditions on the 3,200-mile-wide (5,150 kilometers) Titan, a frigid moon with a hydrocarbon-based weather system and a thick atmosphere that's 98 percent nitrogen. On Titan, liquid methane rains from the skies, runs down rivers, and gathers in lakes and seas (though some of the latter contain primarily ethane).

Indeed, Titan is the only solar system body besides Earth known to support stable bodies of liquid on its surface.

The experiments performed by Malaska and his colleagues suggest that lots of nitrogen can likely dissolve in the moon's lakes and seas — and that small shifts in pressure, temperature and other variables can send the gas fizzing out, like the carbon dioxide bubbles in a bottle of just-opened soda.

"Our experiments showed that when methane-rich liquids mix with ethane-rich ones — for example, from a heavy rain, or when runoff from a methane river mixes into an ethane-rich lake — the nitrogen is less able to stay in solution," Malaska said in the same statement.

This two-way movement of nitrogen gas — into and out of Titan's seas and lakes — is probably a common occurrence on the giant moon, he added.

"In effect, it's as though the lakes of Titan breathe nitrogen," Malaska said. "As they cool, they can absorb more of the gas, 'inhaling.' And as they warm, the liquid's capacity is reduced, so they 'exhale.'"

These findings seem to bolster the hypothesis that Titan's magic islands — which change shape, disappear and, in at least one case, reappear — are gas bubbles. Alternatively, scientists have also posited that the features may be waves or patterns created by rainfall.

"A fizzy liquid could also cause problems, potentially, for a future robotic probe sent to float on or swim through Titan's seas," they wrote in the same statement. "Excess heat emanating from a probe might cause bubbles to form around its structures — for example, propellers used for propulsion — making it difficult to steer or keep the probe stable."