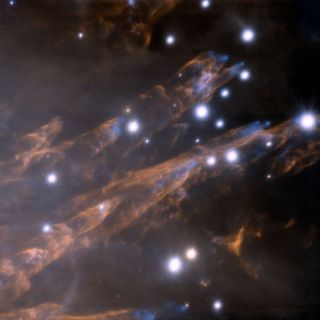 This composite image at infrared wavelengths shows the Orion "bullets" as blue features and represents the light emitted by hot iron gas. The light from the wakes, shown in orange, is from excited hydrogen gas.
(Image: © Gemini Observatory)

Astronomers just got their most detailed look yet at supersonic "bullets" of gas piercing through dense clouds of hydrogen gas in the Orion Nebula.

Each bullet [image] is about ten times the size of Pluto's orbit around the Sun and travels through the clouds at up to 250 miles (400 kilometers) per second-or about a thousand times faster than the speed of sound.

The bulk of both the bullets and the surrounding gas cloud [image] consists of molecular hydrogen. The tip of each bullet is packed with iron atoms that are heated by friction and glow bright blue in the new image, taken by the Gemini Observatory in Hawaii.

As the bullets plow through the clouds, they leave behind tubular orange wakes, each about a fifth of a light-year long. A light-year is the distance light travels in a year, about 6 trillion miles (10 trillion kilometers).

The Orion Nebula is a young stellar nursery located about 1,500 light-years away. Scientists think our Sun was born in a similar environment some 4.5 billion years ago.

The Orion bullets were first spotted in a visible-light image in 1983, and followed up by infrared observations in 1992. Astronomers think the enormous clumps of gas were ejected from deep within the nebula following some unknown violent event about a thousand years ago.

"What I find stunning about the new image is the detail it shows, which was blurred out in any previous studies," said Michael Burton of the University of New South Wales, one of the scientists who first suggested the origin of the bullets 15 years ago.

"This level of precision will allow the evolution of the system to be followed over the next few years, for small changes in the structures are expected from year to year as the bullets continue their outward motion," Burton said.

The latest image of the Orion bullets was created with a new technology, called adaptive optics, which uses a laser guide star as a reference and a rapidly deforming mirror to correct image distortions from the Earth's atmosphere in real time.