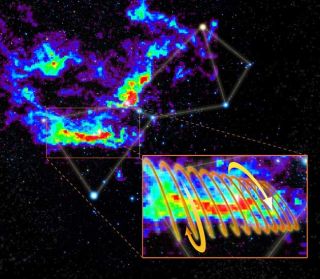 The Orion Molecular Cloud superimposed on the Orion constellation. The inset shows the helical Slinky-like coil that surrounds the rod-shaped cloud.
(Image: © Saxton/Dame/Hartmann/Thaddeus/NRAO/AUI/NSF)

WASHINGTON, D.C.-Astronomers have discovered a giant magnetic field that is coiled like a snake around a rod-shaped gas cloud in the constellation Orion.

Timothy Robishaw, a graduate student at the University of California, Berkeley, involved in the discovery, described the structure as a "giant, magnetic Slinky wrapped around a long, finger-like interstellar cloud."

The discovery, presented here this week at a meeting of the American Astronomical Society, was made in the Orion Molecular Cloud, a known stellar nursery in the constellation Orion. It supports a previous theory about how magnetic fields interact with interstellar gas clouds.

In 2000, Jason Fiege and Ralph Pudritz from McMaster University suggested that filamentary clouds like the Orion Molecular Cloud might exhibit a helical magnetic field around their long axis. This discovery is the first confirmation of their theory.

Astronomers have long suspected that magnetic fields, combined with gravity, help to pull dust inside the clouds together to make stars. But magnetic fields in space are difficult to detect.

"The [magnetic] field in interstellar space is very weak and there are systematic measurement effects that can produce erroneous results," Robishaw said.

The helical shape of the magnetic field is believed to be caused by matter in the interstellar cloud moving in a straight line along the length of the filament. When this happens, it causes the magnetic field around the cloud to spiral around in a corkscrew pattern. The researchers were able to detect this spiral shape using the Green Bank Telescope, a radio observatory in West Virginia.

Carl Heiles, an astronomer at UC Berkeley who headed the study, said that there is one other possible explanation for the magnetic field's helical shape. It may be that streaming jets of high-energy particles from the neighboring constellation Eriandus produced magnetic waves that were transported by shockwaves to the Orion Molecular Cloud, Heiles said.

Once there, the magnetic field could have wrapped around the cloud in the spiral pattern that was observed.

The researchers said that further study is needed to distinguish between the two possibilities.